Adorable footage of a poodle walking on its hind legs has taken the internet by storm and it is not hard to see why.

The footage begins by showing a poodle dressed up in a pair of white pants and blue shirt with a mini wooden basket on its back as it follows its owner. The poodle is also seen walking with its backpack as a group of curious children gather around it.

It is reported that Poodles can walk up to two kilometers on their hind legs without taking a break and it looks like this poodle is used to walking with its hind legs as if it has always been walking with just two legs.

According to its owner, the poodle was inspired to walk on two legs since it always observes its owner’s family. Due to its unique appearance, the dog is a hit among the locals and even the online community 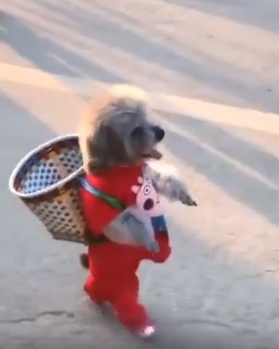 It is not unusual for dog owners to treat their dogs like one of their family members but this dog’s owner has apparently taken the affection a step further.

At first glance, the dog looks like any typical young child when it dresses up in shirt, pants, a cap and walks on its hind legs 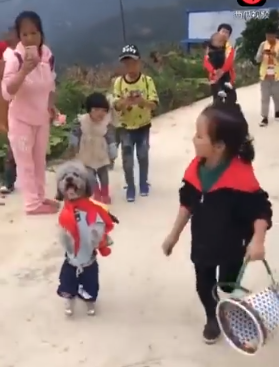 However, it is important to not force dogs walking on its hind legs all the time as it may cause injuries to their backbone and posture.

This cat is obsessed with its new feathered friend and it...