It is definitely not a pleasant experience when you have to drive in heavy traffic. However, regardless of how late you are for a meeting, you need to follow traffic rules.

Unfortunately, this impatient motorist chose to ignore them and decided to cross a busy road in a dangerous manner.

This shocking footage shows how to extreme lengths an impatient motorist would go to avoid getting stuck in a busy road.

The video begins with the driver driving his scooter, he accidentally bumps into a van as he attempts to cross to the opposite lane which is apparently busy with moving cars and motors 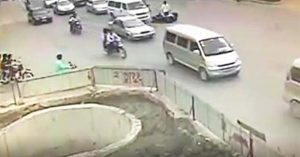 Have you come across this type of driver? If you have not, what would you do if you were in this situation?

As he try to get away after confronting with the driver of the van that he bumped into, the motorist proceeds to cross the road, only to bump into another car 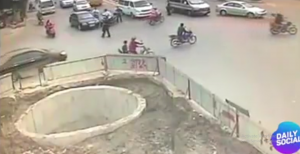 When the owner of the car came out of his vehicle, the impatient motorist attempt to escape. Unfortunately, he bumps into several other motorists!

After a series of accidents, you might think that the man has given up crossing the road but you are wrong!

Apparently, the ignorant motorist continued to cross the road but this time to the wrong lane and bumps into a truck! He might be lucky not to sustain any injuries when he bumped into the truck. His action is absolutely dangerous to himself and to other motorists as well.

This cockatoo had a rough day and began complaining to its...