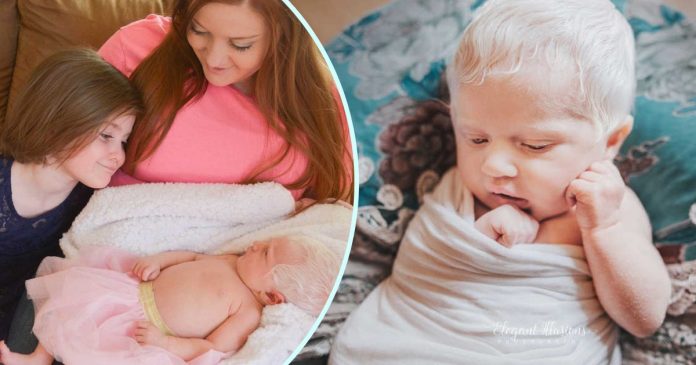 When Taylor and Chris Dunnavant found out that they were pregnant with their second child, they just could not contain their excitement and joy. This time, Taylor had an easy pregnancy. There were no cravings, no meltdowns, no constant fatigue unlike her first pregnancy. Everything seemed wonderful and great until their baby was born.

Taylor knew that her newborn is different than other babies when she saw nurses and doctors crowded around her baby soon after the birth. She was unprepared and confused but as a mother, she knew that she would love her baby with all her heart. This is her story.

“When we found out we were pregnant again in July 2017, we were surprised, but had no idea just how surprised we were going to be. I had felt ‘pregnant’ for about 2 weeks, but thought maybe I was just imagining things since two of our friends had just told us they were expecting,” Taylor wrote. 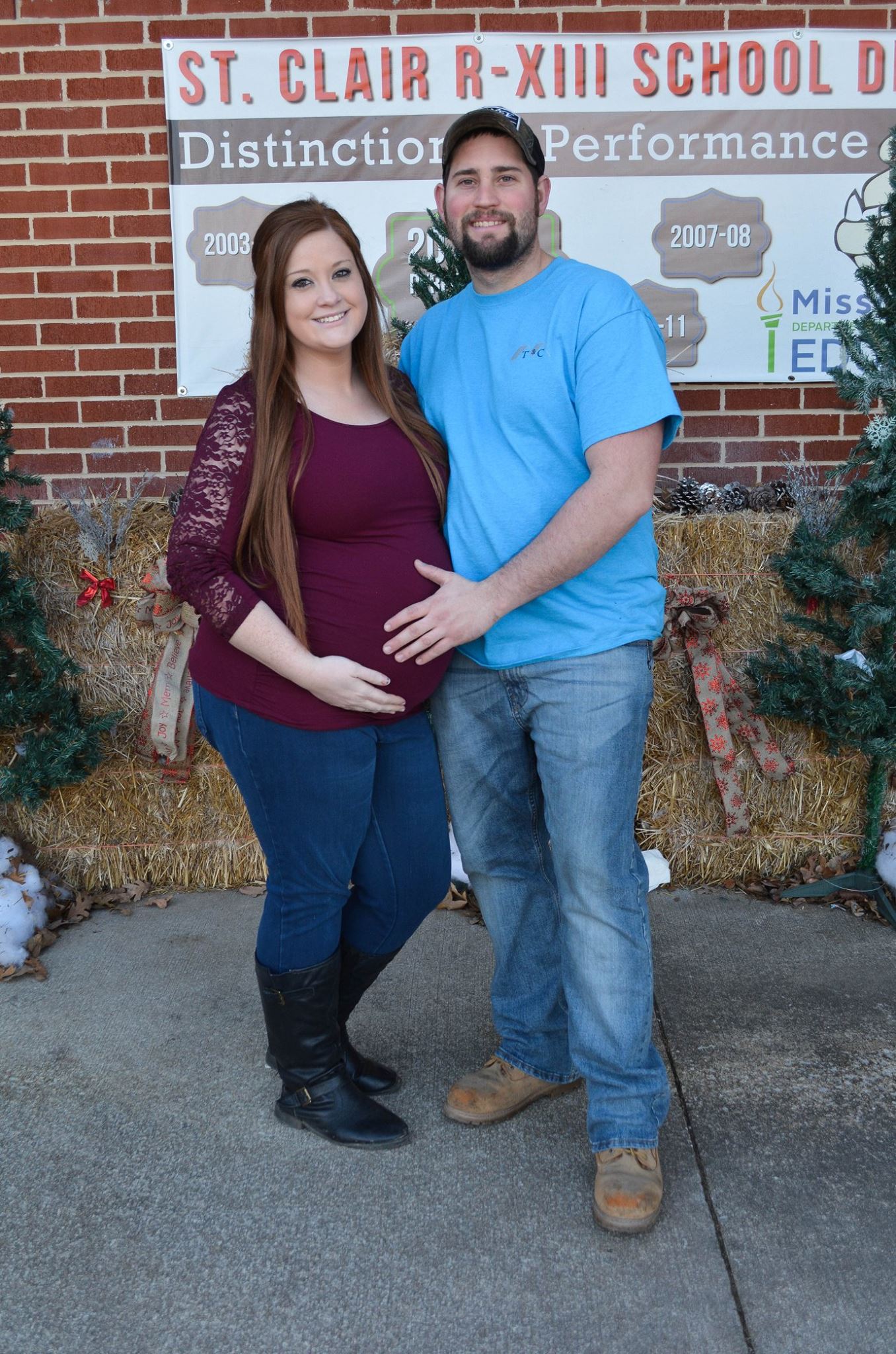 For her second pregnancy, Taylor expected that she would crave for some weird food, gain 20 pounds and have a baby after 40 weeks later. However, the opposite happened and she even lost weight.

“This was shocking for me, because I always thought when pregnant, you must gain weight. The doctors assured me it was completely fine and that the baby was still growing normally.”

Fortunately, there was nothing serious about her nosebleeds and pain. Then, at 20 weeks into her pregnancy, Taylor and Chris found out the gender of their baby.

“At 20 weeks, we learned that our little bundle would be a girl! Again, another shocker. I was convinced the baby was a boy. The pregnancy had been polar opposites from my first by that point.” 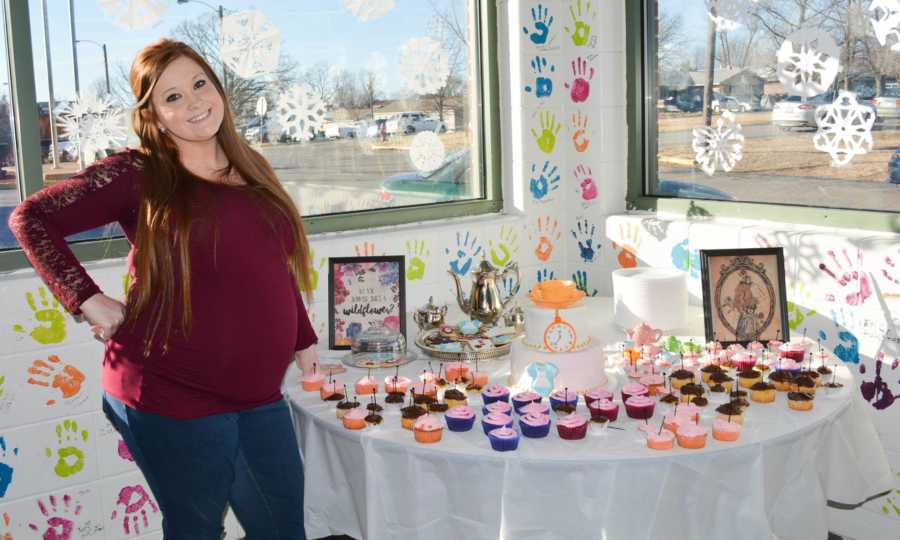 The pregnancy was quite an easy one for Taylor compared to her first pregnancy. Weeks went by like a breeze and suddenly, it was only two weeks away from her supposed due date. However, she never thought that her baby would come out sooner than she thought.

“Sunday, March 4th, I woke up feeling well rested, which was a first. I got up and made breakfast for my family. We went out to the garage to spend some time together working on Demolition Derby cars. Normally I would have been exhausted, but I was perfectly fine. That evening, my water broke.”

Thankfully, Taylor agreed to go to the hospital.

“I agreed. When we arrived and they admitted me, my nerves set in. I was going to have a baby. I didn’t have two weeks. She was coming very soon.”

“After 15 hours of labor, I was exhausted. I was completely drained. But I knew that I still had a job to do. Baby girl was coming. My nurse assured me that we would only have to push for 5 minutes. I put all of my faith in her. During pushing, my nurse, Lindsay, looked at me with a huge smile and said, ‘She has hair!’ I wasn’t surprised. Our first daughter was born with a head full of the darkest black hair I had ever seen in my life. I was so excited. Would this baby have red hair like me? Or dark hair like her sister?”

After a final push, Taylor safely delivered her baby daughter. When the doctor lifted her up for Taylor to see, she did not expect that her baby was going to have white hair.

“My doctor lifted her up for her daddy and I to see her for the first time. Noralynn Kay was finally here! When he set her down, all I could do was yell, ‘Oh!’ Our baby had hair alright, a head full of hair — white as snow.” 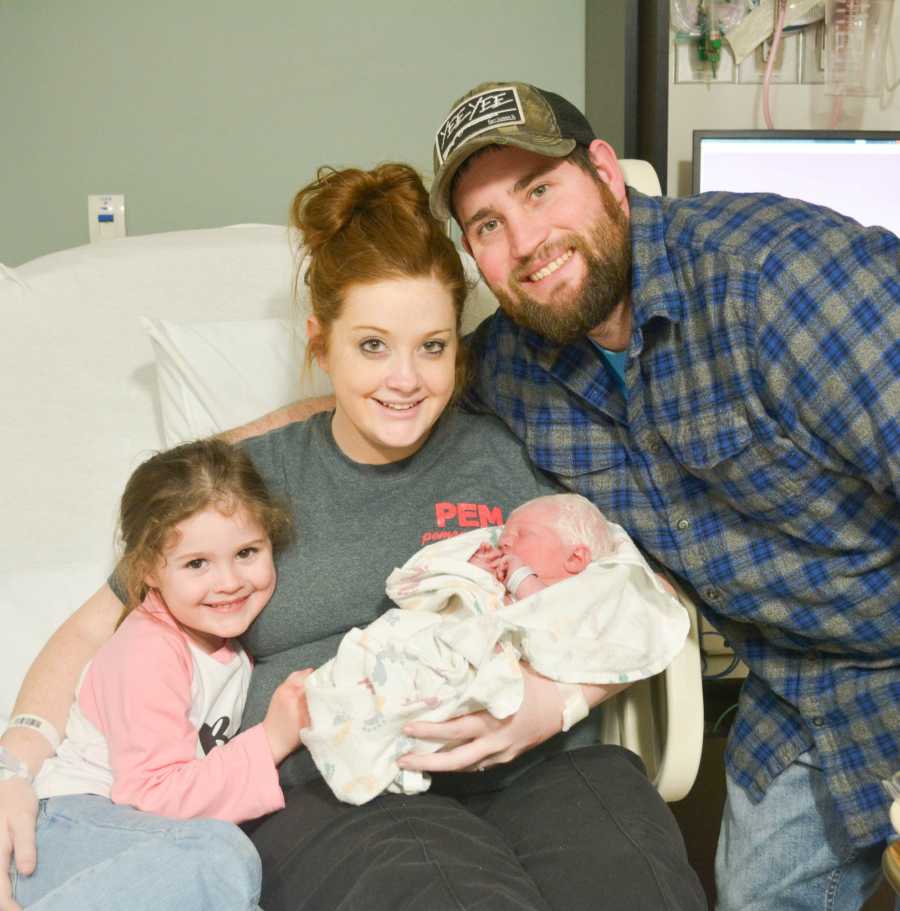 “I looked at Chris and all I could say to him was, ‘She has white hair!’ I told him to go with her to the other side of the room while they cleaned her up.”

That was the time when thoughts started to swarm in her mind. Taylor was definitely prepared for her second delivery but she was certainly not prepared for the surprise 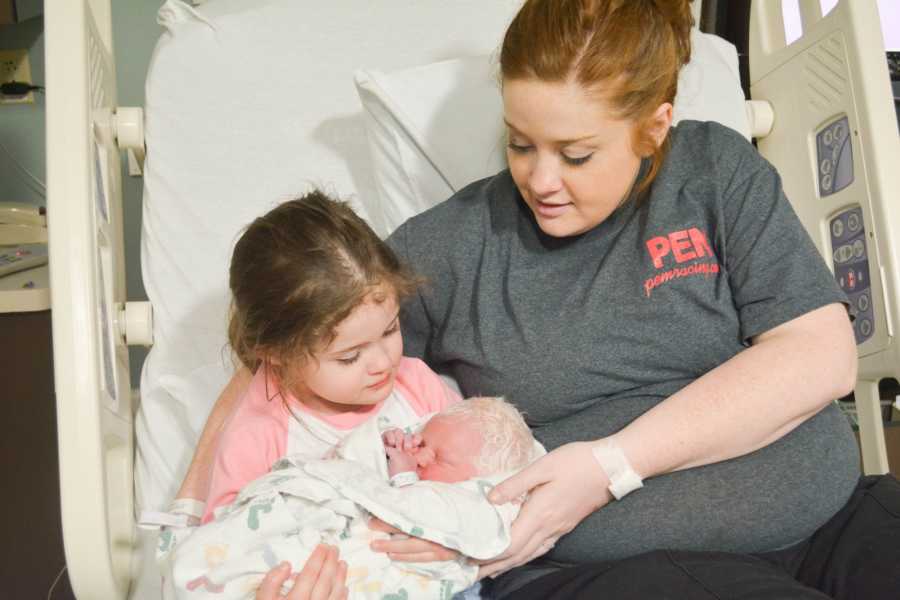 “‘How did she get white hair? What caused white hair? Is our baby albino? How could she be albino? Is she okay?’ I kept shaking. The nurse told me it was probably just from labor, but I think it was my nerves because I was terrified of what could come from this.”

Taylor and Chris were not the only ones who were confused and amazed by baby Noralynn’s white hair. As news spread like a wildfire in the hospital, the nurses began to come in just to see her newborn daughter 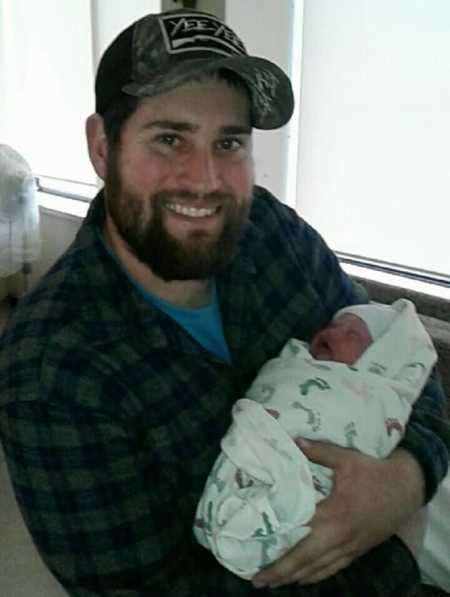 And then questions started coming from others…

“‘Is she an albino? Where did the white hair come from? Were you white-headed as a baby? Is anyone in your family albino?’ I was completely unprepared for the amount of attention and questions we were receiving. And there was something about her being called albino by strangers that struck me the wrong way. Like they were isolating her. Like they were labeling her.”

At first, Taylor admitted that she was not much informed about albinism, thinking that the condition might indicate that her daughter might have a life-threatening condition. “Her pediatrician told us that all we could do was go see a genetic specialist. I became angry. I wanted to know. Was my child albino? What does albino even mean? Is she going to be okay? What health conditions come along with being albino? Why does no one have information for me now?”

On top of that, she was worried if Brooklynn, their eldest daughter would ask her why her baby sister has white hair and looks different. However, it turned out that Brooklynn was excited to see her baby sister’s white hair as she looks like Elsa, a  character from the popular animated movie, Frozen 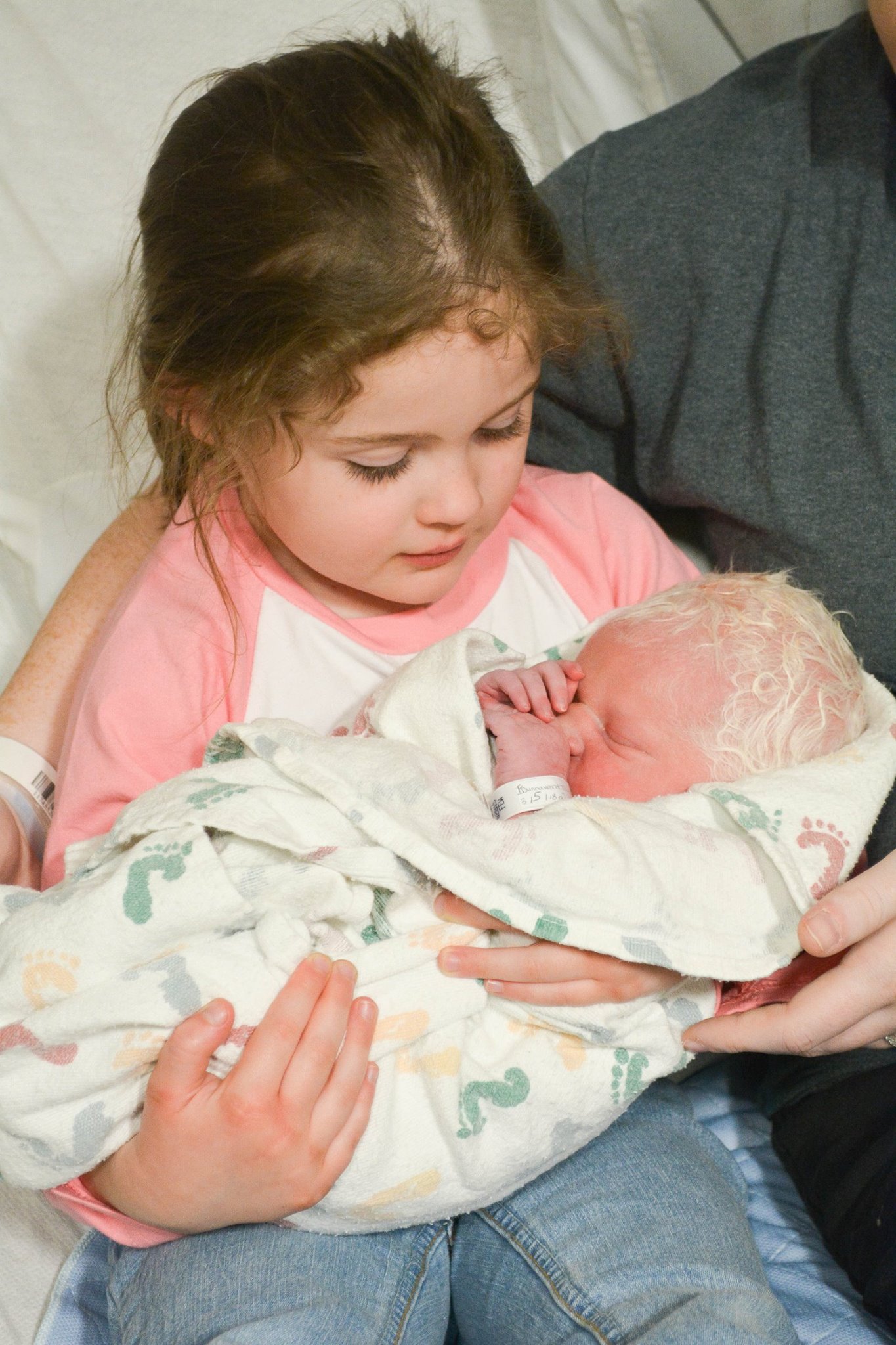 “She told me that her sister was a snow fairy, and then she informed me that she was related to Elsa. I should have known that children see no differences.” Apparently, the waiting period before Noralynn’s first paediatrician appointment was a nerve-wracking one. Thankfully, although suspected of albinism, baby Noralynn was allowed to go home with her parents. There was even a time when people yelled at them when they took her out in public. “People would point, and stare. And we even had people yell across the grocery store to ‘look at the little albino.’ Of course, this upset us. We expected that type of behavior out of children but never from full-grown adults.” “And then the day came where we saw the specialist. Chris held my hand the entire way to the office and just kept telling me no matter what, it would be okay. He and I were nervous as could be sitting in the waiting room waiting to be called back. When we finally got back there, they began questioning family history and drawing a family tree in front of us to try to pinpoint where this could have possibly come from. With neither of us having any family members that we know of that have albinism, we were completely confused.”

The genetic counselor explained to them since albinism is a rare condition, it might be that both Taylor and Chris have a recessive albino gene respectively which led to baby Noralynn’s albinism. On the other hand, it was also possible that the gene mutated on its own Then, a blood test was done to determine the type of albinism that Noralynn has. The genetic counselor also explained to them that it was unlikely for their baby to develop pigments for her hair and eyes “The genetic counselor sat down in front of us and started to explain different things that come along with albinism. With Nora specifically, it is unlikely that she will ever have any other hair color other than white. It is possible she may gain some pigment, but unlikely. The same with her eyes. Her eyes will remain silver with glares of red, and it’s possible that they may gain little pigment, but unlikely. She will most likely need some type of corrective lenses, like glasses.”

Taylor and Chris also needed to put sunscreen with the highest SPF on Noralynn. She also might develop hearing trouble. However, apart from that, Taylor wrote that she was actually relieved. All the conditions that come with albinism seemed to be manageable.

“This entire time I was horrified over all things that could be managed. A weight was lifted off my shoulders. She is healthy, just different.” Nevertheless, she admitted that it would be hard to deal with the public as they raise her up. There will be times when people ask tough questions or the possibility that Noralynn will end up not liking her special features when she grows up.

“At first, it was extremely difficult to deal with all of the attention we were receiving. We cannot go anywhere without people stopping and asking something in reference to her hair. Or asking to see the color of her eyes, or just asking straight out if she is albino.

“Now I just politely respond with, ‘She has albinism.’ Most people are just genuinely curious. That’s why I feel it is so important that we shine a light on the subject.” 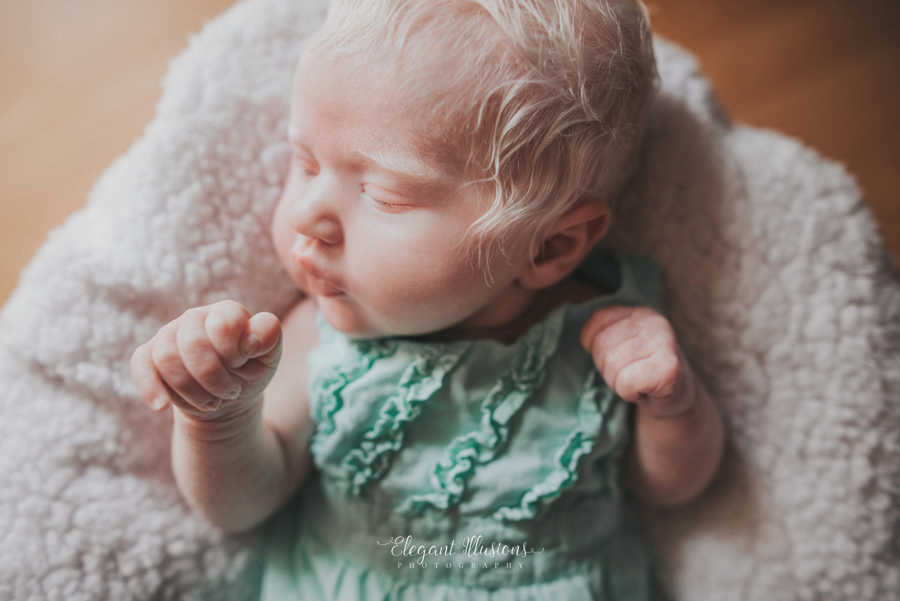 Albinism does not mean that Noralynn is less human than others. It is just that she looks slightly different than those around her who have darker hair and eyes.

“Before Noralynn, Chris and I had zero knowledge of albinism. We’re learning more and more every day. I’m slightly upset with myself, because I was so worried about the condition without knowing anything about it. But now I know, and everything is going to be okay. We’ve been given such a special little girl to raise and to grow with. Her father, sister, and I couldn’t be more blessed to have this wonderful little life of ours. She not only brings joy to everyone she meets, but to anyone who gets to see her unique features in photographs.”

Taylor ended her writing that having albinism is okay and that everyone is different and unique in their own ways.

“Having albinism is okay. Being different is okay. Having Noralynn has opened my eyes in so many ways, learning to accept that everyone is different and unique in their own special way.”