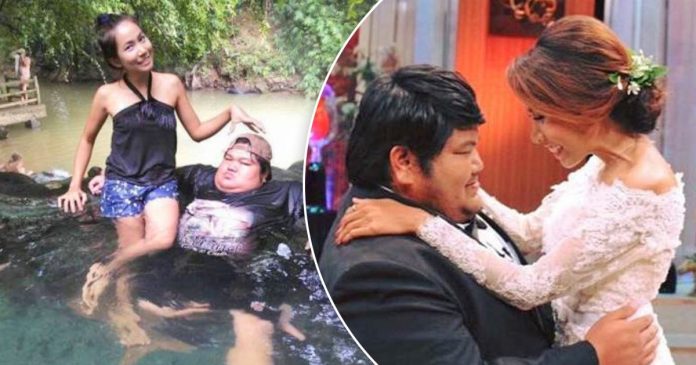 The bond of love that forms between two people does not take into account their physical appearance. Individuals in mature relationships realize that looks will ware over time therefore, they choose to focus on the personality and character of their partner regardless of what they look like.

This couple from Thailand has proven that true love has the ability to overcome all obstacles including the disparity between their physical appearance. They are one of only a handful of couples who can conquer the social stigma surrounding their relationship, which is exactly why their love prevailed.


According to Stomp, Puwadol and Kudi fell in love with each other almost a decade ago. Throughout his life Kudi has been overweight which prompted bullies to ridicule and taunt him regularly. He was nicknamed “The Ball” by his friends and the people around him.

When Kudi first started seeing his love interest, many people did not like the idea of the two of them going out together. This was because of the significant difference in their physical appearance. While Kudi weighed a hefty 120 kilograms, his girlfriend was a petite woman of only 44 kilograms.

The couple cemented their relationship and recently got married. Puwadol was not interested in succumbing to the harsh opinions and judgement of the public regarding their relationship. She knew she loved her husband and says that Kudi has always been loyal and supportive.

He has been her pillar of strength and she doesn’t care about what other people think of their relationship. She loves her husband and says Kudi is always loyal and supports whatever she does and when she needs it to be on the side.

Puwadol said, “I know his appearance is not handsome and he’s also overweight, but his heart is very good. That is what matters to me.”

Puwadol also said, “Kudi is very loving and caring. Although he does not like short-haired women, he tells me I look beautiful everyday with my short hair. ”

Their relationship is not something you see everyday and although many people try to bring them down with harsh comments and taunts, their bond never wavers.

Hopefully, Puwadol and Kudi’s relationship stands the test of time and that they continue to serve as a testament to all the bullies and haters of what true love should be.