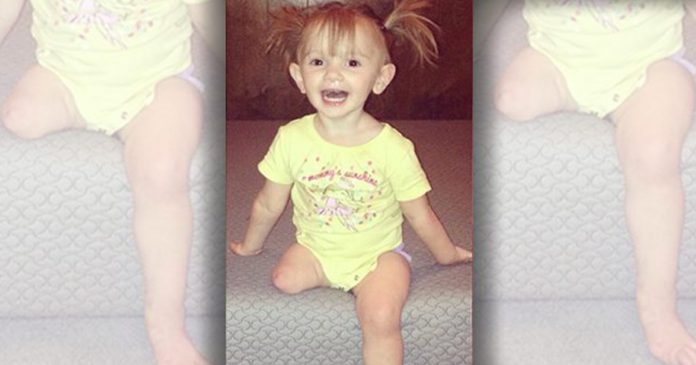 This is an inspiring story of how a little girl got one of her legs amputated when she was a baby, and how she grew up facing all the challenges in life.

When little Jemma Kelly was born, her mother Tamara did not expected her to be so ‘different’. Jemma was born with deformed hands and legs.

“She only had three fingers on each hand and there wasn’t an ankle on her bottom right leg so it had formed in a hook shape,” said Tamara

Jemma is unlike any other children. Due to her abnormal hands and legs, she could not walk or play like other children. Tamara was worried of how her daughter would grow up having these disabilities.

After consulting options from doctors, she decided to amputate Jemma’s leg above the knee. It was a brave and difficult decision as no mother would want her own daughter to undergo a complex surgery especially when she was still a baby.

“I want my daughter to lead a normal life, she’s an amazing little person and I will not let her life be changed by her disability,” Tamara said

Jemma got her legs amputated when she was nine months old. Two months later, she was fitted with a prosthesis leg.

It was difficult at first as she has to learn to balance on one leg, as well as walking. In addition, she also strives in holding and picking things up with only six fingers.

Tamara: “We were given options to extend her leg with screws, metals, and rods, but we decided that if she had it amputated she could live a better life without countless surgeries”

With the encouragement from her parents and brother, Taven, eventually Jemma was able to move freely and started to play like other toddlers.

Jemma engages in all sorts of activities like cheerleading, playing tee-ball, bike-riding, and bouncing on trampolines. She is very active and doesn’t let her disabilities stop her.

“If you covered her prosthetic leg you’d never know the difference between her and any other child… Now she can bend down to grab things like in tee-ball and so she’s just getting used to being able to kneel rather than throw her leg out,” said Tamara

Now Jemma leads a normal life just like any other children. She is living happily and enjoys doing fun activities with her prosthetic leg. It just goes to show that with a lot of support and encouragements, anyone can overcome difficult challenges.

“We’re all incredibly proud of everything she’s done so far, she’s an amazing little girl,” according to Tamara

Watch the video below to see how amazing Jemma is playing sports. Share this news so that it will inspire others to overcome every challenges in their life.