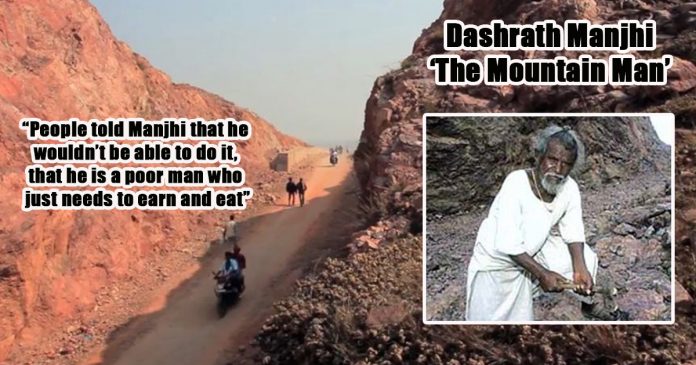 Determination can push a man to do great and extraordinary things. Love can break boundaries and even carve mountains. The combination between love and determination can set a man to achieve the impossible. That is what happened to the late Dashrath Manjhi also known as ‘The Mountain Man’.

Manjhi lived in a small village called Gahlaur. The nearest town is located only 1 km away from the village. However, there is one big problem — there is a huge mountain that divided the village from the town.

The town is where all the villagers would get their supplies and daily needs. It is also where children would go to school or sick people would go to the clinic. There were only two ways to get to the town. People either walked for 70 km around the mountain or they go through it hiking along the narrow and treacherous path.

The mountain is 300-foot tall with narrow and dangerous pathways

Manjhi lived with is wife, Falguni Devi. They both eloped together when Devi’s father refused to accept Manjhi as her husband because Manjhi is from a low class and does not have any job. Devi gave birth to a baby boy and soon she was pregnant with another child.

One day, Devi who was heavily pregnant, was taking lunch for her husband to the fields. She had to climb the mountain under the scorching sun. Luck ran out when her foot slipped and fell down from the mountain.

Then village people alerted Manjhi about his wife. He quickly ran in panic and carried his critically-injured wife to the nearest medical facility. There was no way he could climb the mountain as it was too dangerous so he had to walk 70 km all around the mountain. He finally arrived after a hours of walking and running. The doctors managed to save the baby girl inside the womb. But sadly, Devi had lost a lot of blood and passed away.

Manjhi, who was devastated cursed the mountain and vowed to bring it down once and for all

He began cutting down the rocks bit by bit. Using only a sledge hammer, chisel, and crowbar, he single-handedly carved a road through the 300-foot mountain. He sold his three goats to buy those tools. For years, people had called him crazy for his seemingly useless effort. But Manjhi ignored them and stayed determined. His mission to make a path through the mountain would eventually benefit the entire village.

He labored tirelessly while developing his own technique. He burned firewood on the rocks, then sprinkled water on the heated surface which cracked the boulders making it possible to reduce them to rubble. He plowed the fields in the morning and worked on his road in the evening until night time.

Finally, after 22 years of hard-work, Manjhi was finally able to make a pathway through the mountain. He started in 1960 and finished in 1982. His efforts has benefited the villagers tremendously. Their journey to the town has been reduced to only 1 km. The road is 30 feet wide and 360 feet in length.

Due to his dedication, the road is named Dashrath Manjhi Road

His nephew, Dahu Manjhi said that “People told Manjhi that he wouldn’t be able to do it, that he is a poor man who just needs to earn and eat.”

Now it has been over three decades since the ‘Mountain Man’ completed the road. In 2007, Manjhi died of cancer at the age of 73. The chief minister of the state of Bihar gave him a state funeral. However, he did not received the ‘Bharat Ratna’, the nation’s highest civilian honor that recognizes “exceptional service” in the community. Many people thought he should have deserved it.

Manjhi’s descendants and the villagers now have easier access to hospitals and the outside world, but many of them still live in poverty. Hoping to continue on his legacy, Manjhi’s lifelong friend has committed to opening a trade school in the village, setting up the Dashrath Manjhi Welfare Trust to inspire the youth and offer meaningful education to change their lives for the better.

There is even a movie made based on his story titled ‘Manjhi the Mountain Man’.

Check out this video for more of his story and share your thoughts. How far would you go to help the people in your community?