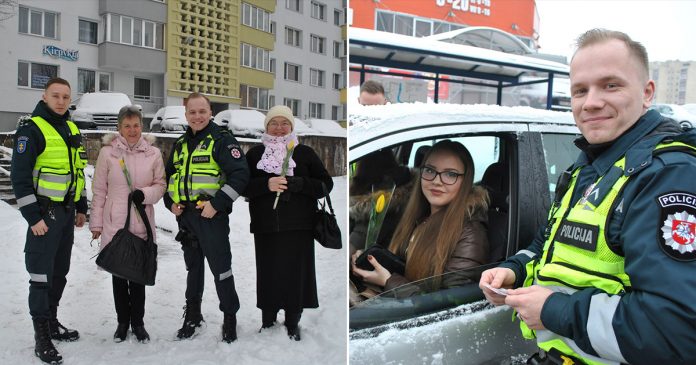 When you are pulled over by a police officer, it usually is a sign that something is wrong. You started to check if you have been speeding, or you forgot to wear your seat belt, or maybe you ran a red light. You’re afraid that you will receive a ticket or get arrested.

However, during International Women’s Day, policemen in Lithuania have begun a tradition like no other. They will stop any woman driver and pull them aside of the road. But instead of giving them a ticket, they gave them… flowers.

The tradition have been going on for several years and have received multiple responses.

Some have expressed concerns with this kind gesture, saying that giving flowers to women is sexist and enforces patriarchy in the society. Others suggested that the officers could be spending their time and resources more effectively and not waste tax payers money on flowers.

Whatever the responses, it all comes down to the intention of the police officers

However, the responses they get are mostly positive.

The tulip flower represents the symbol for the arrival of spring.

Spring also represents the beginning of a new life

Flowers are also a beautiful way to tell someone “thank you,” “I love you,” or “I hope things get better”.

Most women are pleasantly amazed when they received tulips from the officers. They express their gratitude for the wonderful surprise, joyful mood, and the attention shown, wishing officers the best of luck in their work.

The flowers are given out to women in Vilnius, Kaunas, Klaipėda, and other smaller cities all over the country.

The Lithuanian Police Facebook page posted the event and received over 5,000 reactions and more than 600 shares with many commented in favor of their actions.