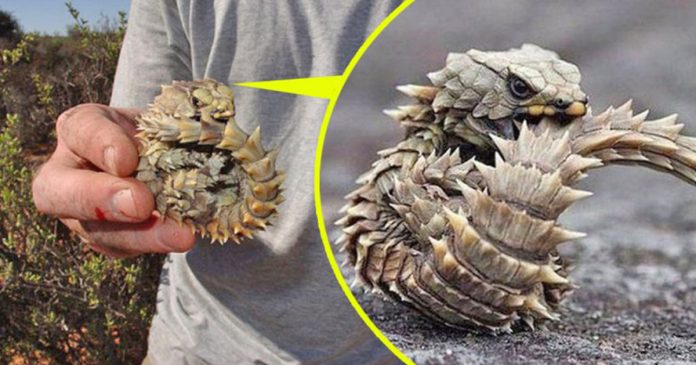 Imagine taking a hike across a rocky and mountainous terrain. Suddenly, you came across a strange creature that you have never seen before. Would you dare approach it?

In the mountain slopes near the sandstone area in South Africa, a man found a special looking creature between the crevices of a rock. It looked like a dragon with broken wings. The creature did not escape when it was captured by the man. Instead, it bit its own tail and rolled up into a ball. The man felt very curious and after doing some research on the internet, he discovered that the creature is known as the Armadillo Girdled Lizard. 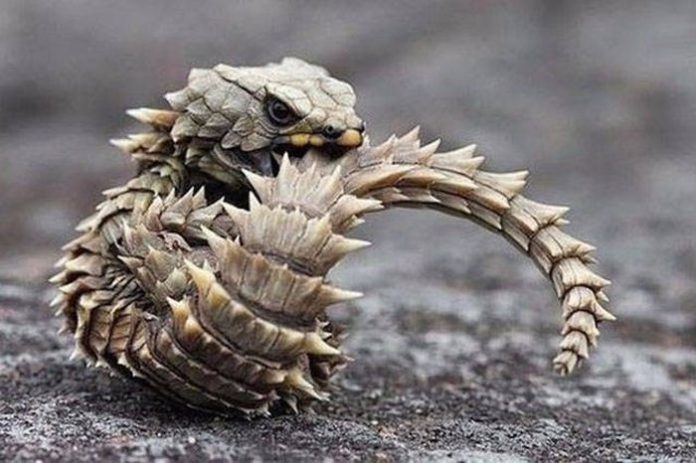 The lizard can be found in the semi-desert Karoo region of South Africa. They live in large cracks in rocky outcrops, where its thick scales protect the body from abrasion. They are oddly shaped and are very easy to breed. Which is why they are considered as a popular animal to be kept as pets. 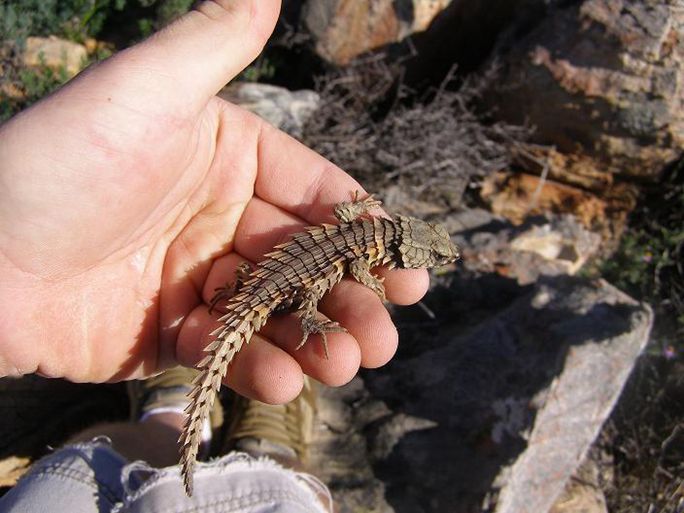 Though it is considered a reptile, the lizard does not lay any eggs. The female armadillo girdled lizard gives birth to one or two live offsprings once a year at most which makes their reproduction rate extremely low. The lizard is highly adaptable and can live for long periods of time if it can survive by itself. They usually mate during the Spring season.

Unlike most reptiles, the female armadillo girdled lizard actually takes care of its offspring and feeds them 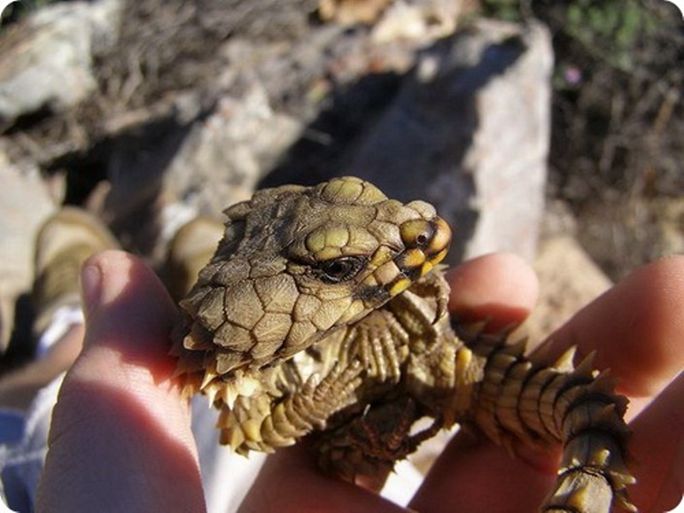 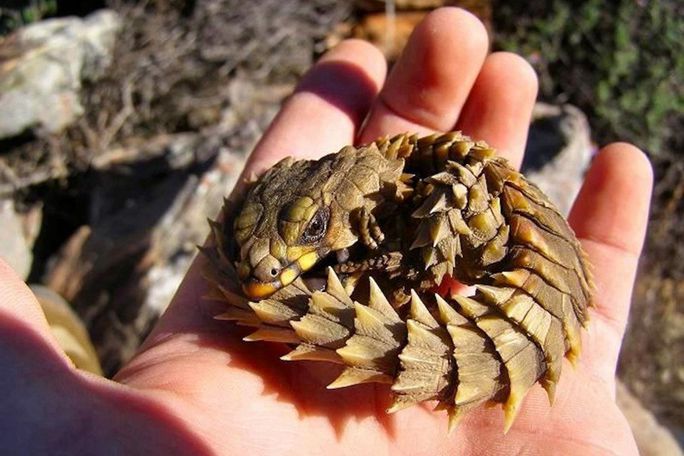 Due to its rarity, customers and and illegal dealers are willing to pay exorbitant prices to attain this animal. In recent years, the illegal exports and sales of the lizard has increased dramatically. The animal could be seen in almost every part of the world. The price for each is extremely expensive on the black market.

Unfortunately, it a very vulnerable creature as it can be easily captured. The reptile live in groups and its movement is quite sluggish. 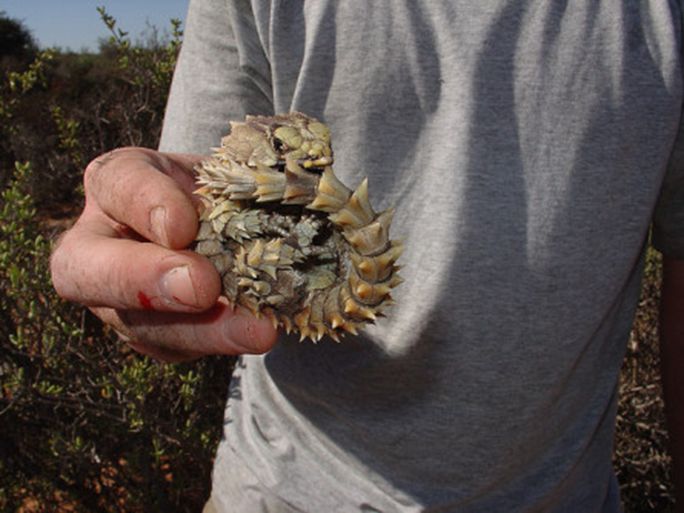 Though it is relatively easy to catch an armadillo girdled lizard, it is also quite cunning. They tend to escape their predators by curling up like a ball and rolling away. Which is why they bite their tails when feeling threaten. Their hard and spiky armor also serves as a protection towards their soft underbelly. Most people who are familiar with the animal called them as the ‘tail biting lizards’. 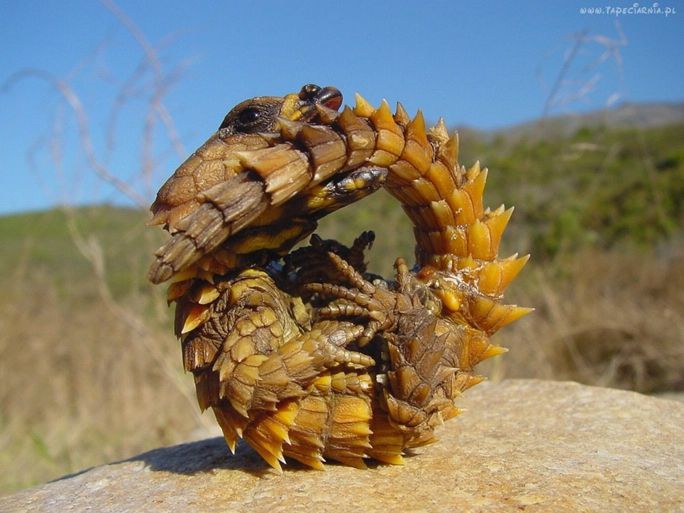 The reptile mostly feeds on insects available near the plants that live in the region. Their main delicacy is the southern harvester termite but they are also known to feed on other creatures such as millipedes and scorpions as well as certain plants.

Due to climate and habitat change, the number of termites have decreased which affected the lizards’ main source of food 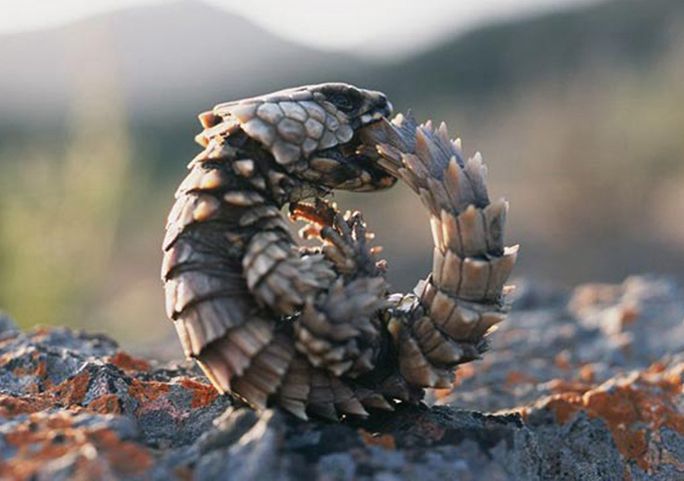 The animal is only threatened by unfamiliar species. After living with humans for a period of time, these lizards will become less cautious and will stop escaping. From then onward, they will display a curious mentality.

The reptile is currently listed on the Convention on International Trade in Endangered Species (CITES).

Any international trade regarding this species are being carefully monitored 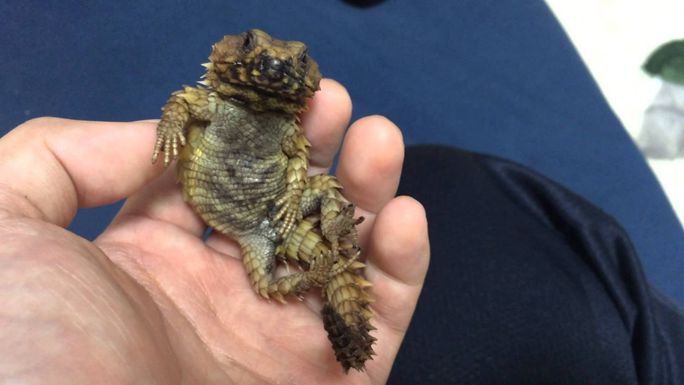 After being adopted by humans, this innocent armadillos will become less protective of themselves and will no longer roll into a ball. Though they are quite adorable, they are considered as an endangered species and should not be taken as pets.

Do you think it is right to keep these lizards as pets? Share your thoughts.