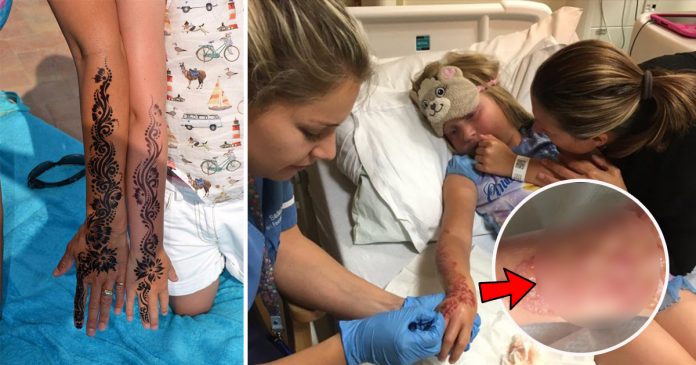 When 7-year-old Madison Gulliver got a henna during a holiday trip, she never thought it would literally ‘scarred her life’.

Madison was on holiday in Egypt with her parents and brother. They enjoyed their time during their first week there. However, things happened not quite as they have planned.

On the second week, Madison’s mother Sylvia suffered a gall bladder infection and had to be rushed to the hospital. The family spent two days of their holiday there but Madison and her brother, Sebastian were well-behaved. The father, Martin Gulliver decided to treat them a reward for being so good during their stay.

At the hotel, there was a salon that offered black henna tattoos to the guests.

Both Madison and Sebastian decided to have one on their arms

Martin thought that it would be harmless since hennas are not real tattoos and won’t be permanent. They are also made from natural ingredients. The children were very happy and delighted when they received their tattoos.

However, in the evening, Sebastian started to experience itches in his arm. He started to scratch irritably so the parents washed his arm and the henna pattern was scrubbed off. Madison on the other hand was feeling fine.

When they returned to their home in England, UK, things were fine until a week later. Madison started to feel itchy on her arm just like Sebastian.

They later washed her arm with water and rub some ointment to moisturize her skin. However things got a lot worse. The next day, her arm began to show huge red blisters just like those who suffer from burned injuries.

“It started to blister so we started looking on the internet about black henna tattoos and that’s when we realized all the worrying things,” said Martin

They looked up the internet and found that the black henna tattoo is actually quite harmful. It contains a substance known as para-phenylenediamine, or PPD. PPD is mainly used in hair dyes but in small doses as it is functioned to increase the lifespan of the dark color. In the UK, PPD is forbidden to use on skin creams as it can cause allergic reactions to the skin.

Madison was later brought to Salisbury District Hospital, where she was treated by doctors and dermatologists specialized in skin burn injuries.

Luckily, the doctors managed to treat her injuries. She has now been referred to a scar management unit. A pressure bandage was put on her arm and she has to wear it for at least six months to minimize the scars.

Doctors claimed that it may take up to two years before Madison’s skin returns to its normal color. A show by Good Morning Britain has shown how her arm is slowly recovering from the scars.

After the incident, Madison’s skin and body has become hypersensitive and allergic to other things as well such as penicillin

After the incident, Martin decided to warn others regarding the dangers of black henna tattoo. He said: “I think it’s partly my fault because I didn’t know about it, but also the fault of the salon because they are using dangerous chemicals on children.”

He also emailed the hotel by attaching a link regarding the tattoo and asked them to refer to their doctors. “We don’t want compensation, the main thing is to care for Madison and minimize the scarring because we don’t want her growing up with a scar for the rest of her life,” said Martin.

“She wanted to see what they were doing so we couldn’t get her to look away,” she was really good and kept saying ‘you’ve missed one,’” said Martin

The hotel in Hurghada later apologised and said it no longer offered the tattoos. In an email, Heike Moursy guest relation manager of Fort Arabesque Resort, Spa & Villas, said:

”On behalf of the owner from the Beauty Center we apologise again what is happened with your daughter. We don’t want to have such horrible reactions to anybody in the future again. Therefore our general manager Mr Max Shoukry have spoken with the owner of the beauty centre to stop the offer of any henna tattoo. We know, this does not help your daughter but we wish her to get well soon.”

Let’s pray and hope that Madison will get better soon and with full recovery.

Share this article to warn others to always be careful when putting unknown substances on the skin.