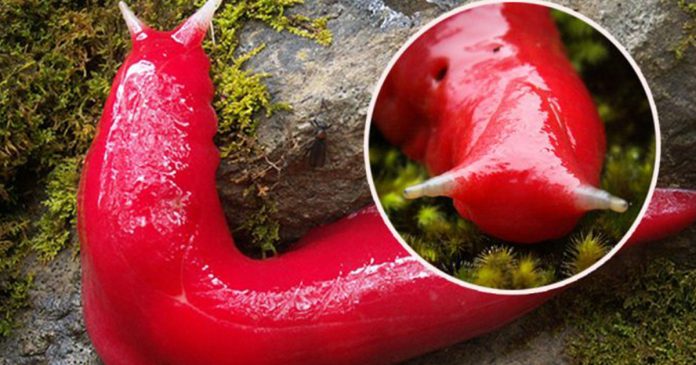 Slugs can be found almost anywhere in the world. On land, in the sea, or even in your shower. Yes, don’t be so surprised if you’ve come across with this small slimy worm.

Slugs are commonly found being black or brown in color. But this one is different. It has a different color and is slightly bigger.

If you have ever hike up Mount Kaputar, a non-active volcano located in New South Wales, Australia, you would be lucky to find one of these slugs which is pink in color!

An Australian National Parks and Wildlife Service ranger, Michael Murphy, said the strange creature has its own species known as Athorcophoridae.

“Recent research in morphology and genetics has found that the Kaputar slug is a unique species which can only be found on Mount Kaputar, Australia,” said Murphy

Murphy says that sometimes hundreds of them can be seen sliding down from the trees on morning after rainfalls.

At high altitudes, this species can grow up to 20 cm (8 inches) in length

Why are they pink in color?

According to Murphy, this is due to evolution.

The eruption from the volcano in Mount Kaputar that happened about 17 million years ago has caused the land to become fertile. This has brought about a change in the surrounding flora and fauna.