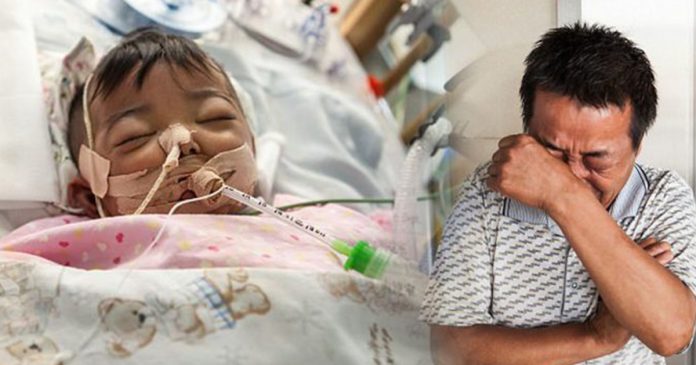 Everyone will receive trials throughout their lives. Some may be tested with lack of wealth, illness or sorrows but imagine if you are tested with these three tests simultaneously like this poor little baby. At the age of eight months old, she has already lost both of her parents and is now suffering from a chronic disease.

Sun Menghan just turned eight months old but this little baby has undergone six operations. Unfortunately, none of the surgeries was successful.

Menghan now is fighting for her life alone without her parents by her side.

They left her upon knowing her medical bills could be high 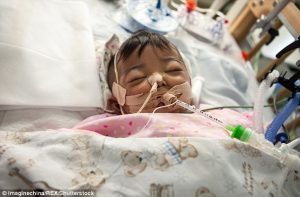 According to Daily Mail, the baby from China was diagnosed with congenital biliary atresia, a condition where her liver fails to function normally due to inflamed and blocked bile ducts.

Her parents decided to abandon her without much hesitation as when the doctors told them that the medical treatments could be expensive. Upon hearing the news, they told the doctors to stop treating Menghan in January.

She was just three months old at that time 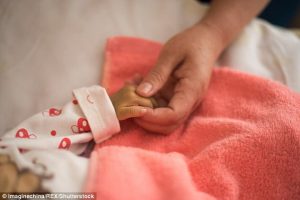 Just before they abandoned the poor baby, Menghan’s mother told the doctors that they rather try for another child instead of spending money on Menghan’s treatments as there was no guarantee whether or not she could recover from the illness 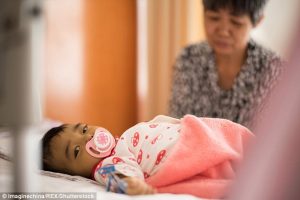 However, Menghan’s grandparents have not given up on her yet and they are trying their best to save her 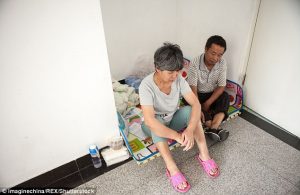 After the baby was abandoned by her own parents, Menghan was then sent to her grandparents to be looked after in the remote Xinjiang Province in western China. Sun Sitao, Menghan’s grandfather said that his family originally come from Anhui Province which is located in eastern China but they later moved to Xinjiang to work.

Mr. Sun who works as a farmer is trying his best to save up money for his grandchild to continue receiving treatment at the hospital.

Initially, Menghan started her treatments in the hospitals around Xinjiang but then, one hospital in Tianjin told them that they have found a matching donor for Menghan 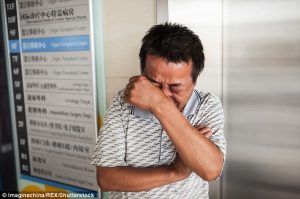 Menghan first underwent liver transplant surgery on July 4 but the surgery was unsuccessful because Menghan’s body rejected the new liver.

She then underwent another two operations on July 12 and July 16.

The devastated Mr. Sun said that Menghan has been under intensive care after her last operation which lasted for 11 hours. He further said that he was disappointed with both his son and his daughter-in-law who are Menghan’s parents for abandoning her.

Only after Mr. Sun made multiple requests to his son that he showed up at the hospital to sign a consent form for Menghan’s surgery as he was still his legal guardian 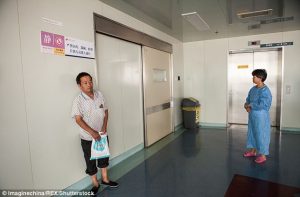 Menghan’s father works in a factory in Anhui and earns 2000 yuan (USD 315) while her mother is a full-time housewife and suffers from depression.

Unlike her irresponsible parents, Menghan’s grandparents have spent all their savings to save the little baby. Thanks to donations from the public, they managed to collect more than 500,000 yuan (USD 78,790) so far.

However, Mr. Sun said that the six operations have cost them more than 500,000 yuan (USD 78,790) but doctors and volunteers promised him and his wife that they would try their best within their power to help the girl 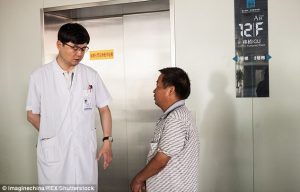 Mr. Sun hopes for nothing except for Menghan’s condition could stabilise soon and she could finally recover from her illness.

We hope that Mr. Sun and his wife remain strong for the sake of little Menghan. We also pray that she could recover from the illness soon and grow up as a healthy girl.