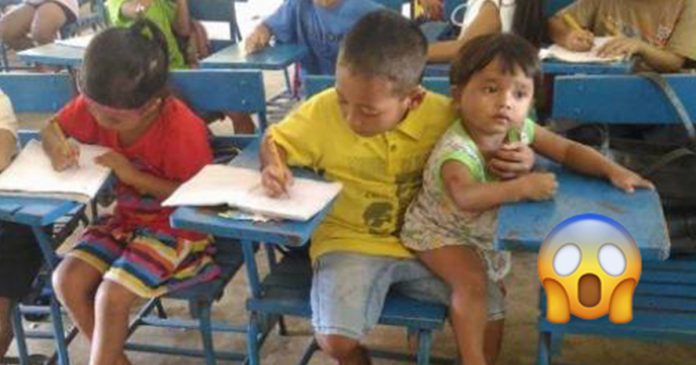 A boy from the Philippines became a social media star after he took his one-year-old baby brother to class as he did not want to skip school and no one could look after his little brother at home.

The 7-year-old Filipino boy, Justin, quickly shot to fame after his picture holding his baby brother on his lap became viral on the internet. 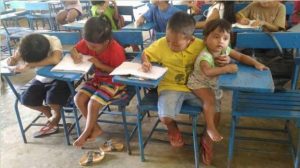 The rural village is 600 kilometres away from Manila.

His teacher who only wished to be identified as Madam Lei took the photo which shows Justin cradling his brother close to him while doing homework in the class and posted it on her Facebook with a caption: 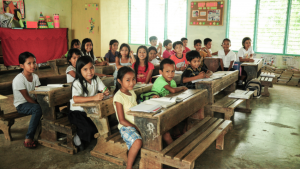 I will carry my one-year-old brother here because my grandmother has to work in the farm and no one will take care of him,” the teacher quoted Justin as saying in the local Bicol dialect, according to the post.

The young boy’s words struck many netizens as how matured and responsible he was compared to his tender age. Many netizens wished the boy’s success in his future.

One netizen commented: “He’s an example of being responsible, despite his tender age.” while another netizen gave the boy a compliment for not forgetting his duty to study despite having a responsibility to look after his brother. “He knows his priorities,” the netizen wrote.

However, the picture also stir a debate in social media where many netizens criticised the absence of parents and the poor family planning in the Philippines. Some of the netizens even compared the boy with the college students who abandoned their studies to participate in a rally to protest against President Rodrigo Duterte.

Nevertheless, the boy sure has a heart of gold for willing to take care of his baby brother despite him wanting to attend the class. We wish him all the best in his future and may his family get the help they deserve.

An incredibly touching small note in a restaurant reminds us the...