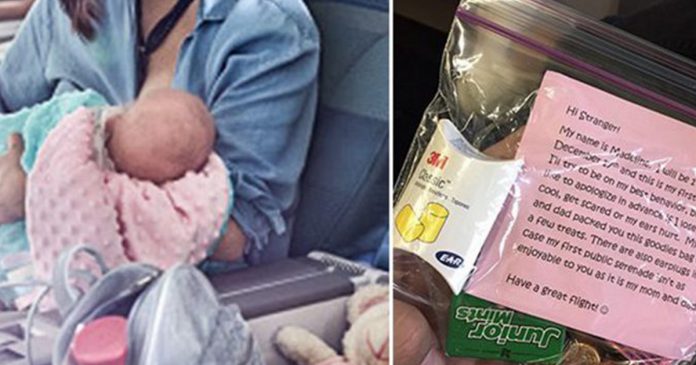 Have you ever planned to catch up on lost sleep while on a long-haul flight only to realize that you are sitting next to a baby? Well, this man was lucky as the baby’s parents had planned a sweet surprise for the passengers, whom their little bundle of joy might unintentionally “offend” with her bouts of crying!

In December 2014, Danaus Chang was on his way to a business trip in Miami, and due to lack of sleep, he was feeling grumpy.

On top of this, he felt his journey wouldn’t be really “calm” when he noticed that a cute little baby would be sitting right next to him

“I was definitely not looking forward to be sitting near a crying baby of generally loud passengers,” he told TODAY

However, the baby’s thoughtful parents were all prepared; they started passing out goodie-bags to those sitting around them.

When Chang received his pack of sweets, it lifted up his grumpy mood

The bag also contained a note that read, “My name is Madeline. I will be 1 on December 17th and this is my first flight. I’ll try to be on my best behavior, but I’d like to apologize in advance if I lose my cool, get scared or my ears hurt.”

Accompanying the sweet note were some treats, like junior mints and Rolos, that the parents had packed for their fellow passengers—but that was not all.

The note continued, “There are also ear plugs in case my first public serenade isn’t as enjoyable to you as it is to my mom and dad.”

Chang said that the atmosphere changed when everyone received the package and the note.

“It was like a scene straight out of ‘The Grinch Who Stole Christmas,’” Chang said.

“I was literally sitting there smiling. I looked around and saw at least eight other smiling faces as well”

He took a photo of the goodies bag and posted it on Reddit with the caption: “A baby just handed me this on my flight. I ain’t mad.”

When Chang landed and checked the response to his post, he saw that the photo had already made it to Reddit’s front page. He then approached the couple to appreciate their kind gesture and to tell them about the post’s response on Reddit.

“They seemed pleasantly surprised and quickly shifted attention to their baby and we said goodbye. By the way, Madeline was adorable,” he said.

These parents’ one simple act of kindness showed that “being considerate of others” might appear to be something so ordinary on the surface, but we must never underestimate the impact it can have on others. Indeed, compassion is a powerful and all-harmonizing energy that grows when shared and spread!

Girl falls in love with her boyfriend again even after she...