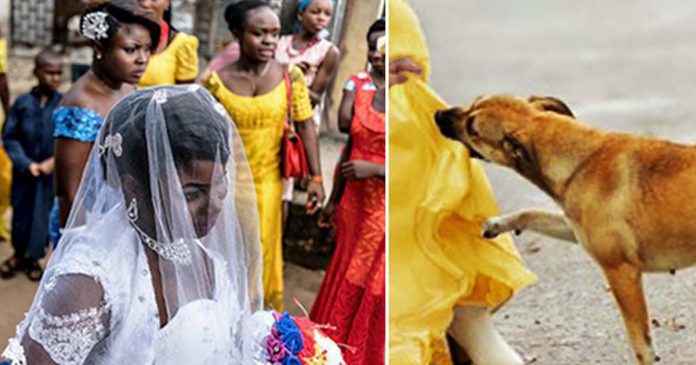 Last Spring, a couple were getting married in a sacred wedding ceremony in Nigeria, surrounded by beloved friends and family. But, there was an uninvited guest in the wedding and almost got everyone killed.

A teenage girl, believed to be from Boko Haram—an Islamic terrorist group—unexpectedly appeared and started walking towards the guests. One of the guests who brought his dog along to the ceremony noticed that his dog started acting restlessly.

In a peculiar turn of events, the dog ran towards the woman, who looked like she was hiding something under her dress. In a minute, the dog was upon her—then the unthinkable happened.

According to the Telegraph, police spokesman Victor Isuku stated, “This forced the suspect to detonate her explosive while battling to wriggle herself from the claws and jaws of the dog”

“The dog stopped the teenage suicide bomber from detonating her strapped improvised explosive devices on the wedding crowd of people,” police spokesman Victor Isuku said. The woman was planning to detonate her vest when she got to the middle of the crowd.

Because of the dog’s quick actions, the bomb exploded away from where the guests were celebrating. According to a report on MailOnline, Boko Haram have been driven out of most towns and villages, which has resulted in them attacking “soft targets” with suicide bombers. The dog and woman both perished in the explosion.

This dog sacrificed itself to save the villagers.  Police do not know the identity of the dog, but its heroism will be passed down amongst the villagers’ children and their children’s children for a long time to come.