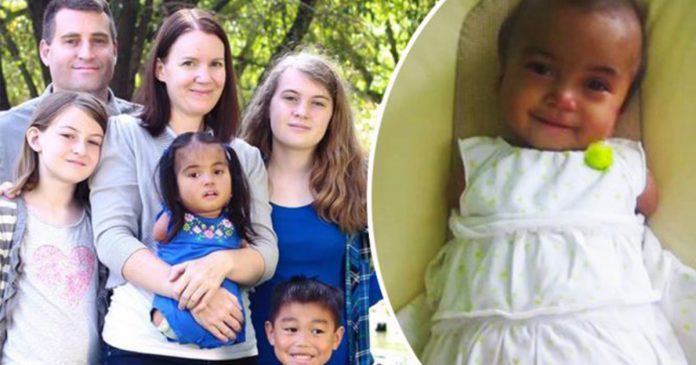 This couple adopted a baby girl born without arms and legs. They thought the adoption would change the baby’s life; little did they expect it would change their lives too! Their special-needs child has taught them to appreciate and find joy in little things. 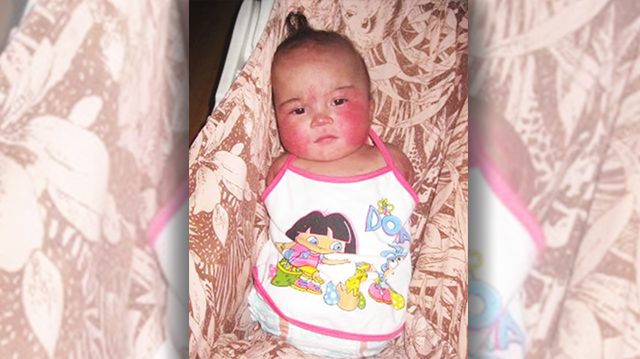 At 6 months old, baby Maria was placed in Chosen Children Village, an orphanage in Silang, Philippines. She was perfect and beautiful just like any other child, except that she was born without limbs.

With a fortunate stroke of serendipity, Adrianne and Jason Stewert, from West Jordan, Utah, came across a picture of Maria while they were looking through a list of children who were awaiting adoption in October 2014.

The moment they saw her picture, they fell in love with little Maria.

Maria was perfect and beautiful, except that she was born without limbs 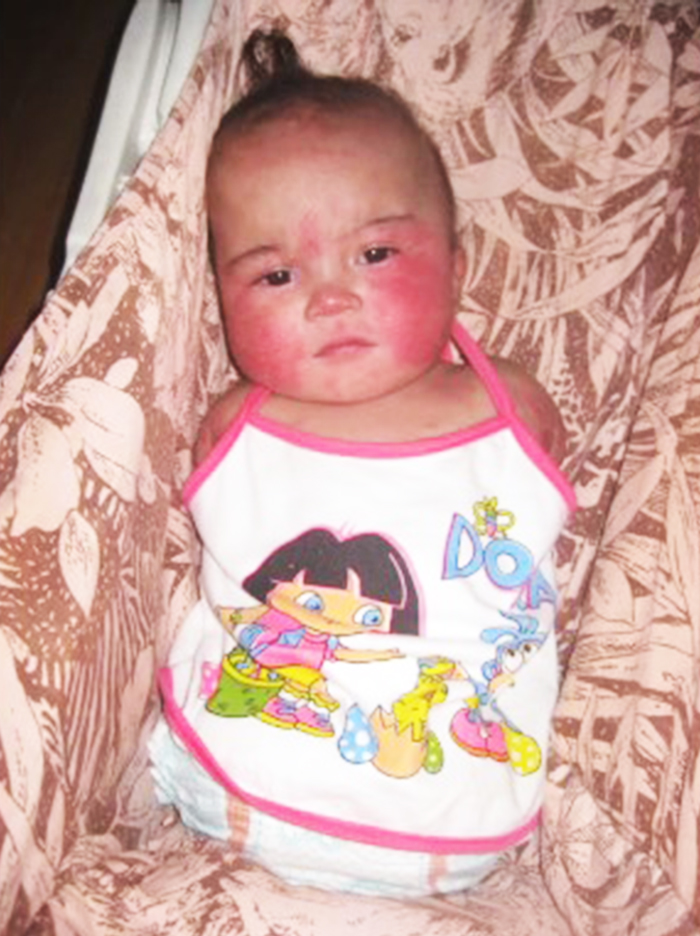 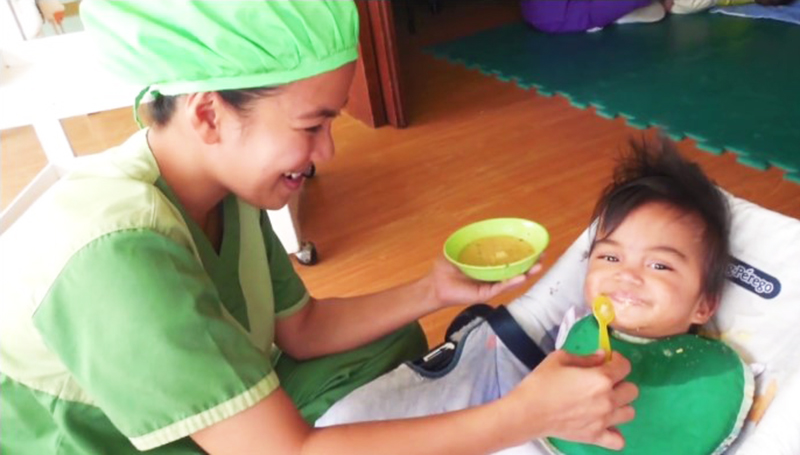 “She had one of the most beautiful smiles and at the time we weren’t really planning on adopting a special needs child but we just fell in love with her,” said Adrianne. “We just knew we needed her to be part of our family.”

However, for the couple who already had two girls, 11 and 13, as well as an adopted boy from the Philippines, Joshua, 6, it took a lot of courage and faith for the parents to make the important decision of adopting a child with special needs, but in the end, they decided to go ahead with the adoption.

“We knew that we could love her and that loving her was what mattered most!” wrote Adrianne on Facebook. 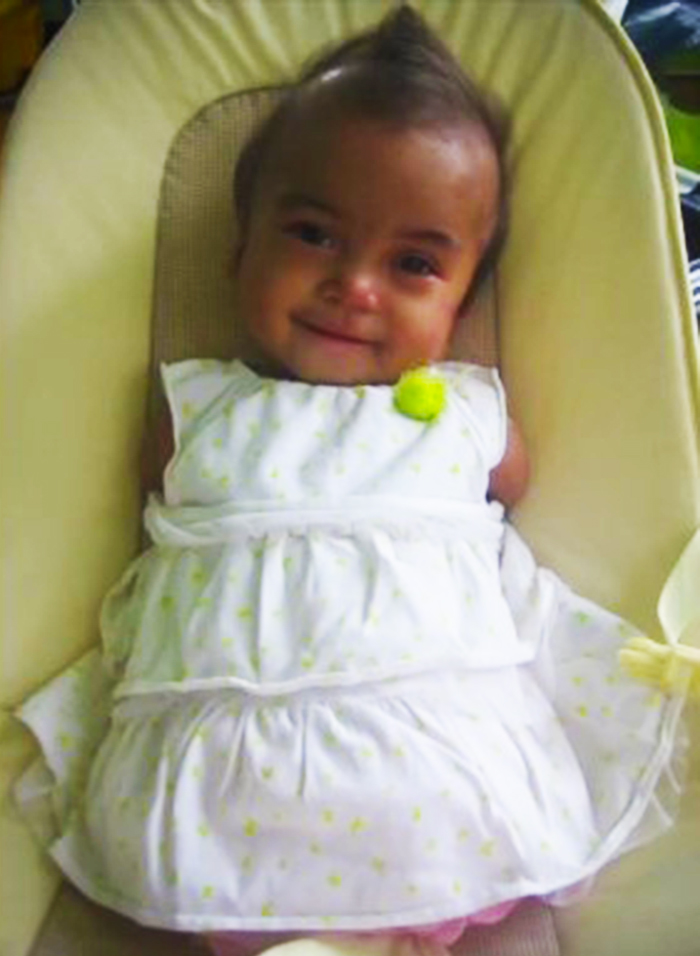 They waited for a year before the Stewert family traveled to the Philippines to bring little Maria home in October 2015.

Upon meeting the calm and innocent Maria, their worries melted away.

“Even meeting her for the first time, you think she’d be scared and nervous to meet strangers, I mean, she’d seen a picture of us. But she did so well and she was so happy and smiling for us and it was really amazing,” said Adrianne.

The couple flew to the Philippines to collect Maria 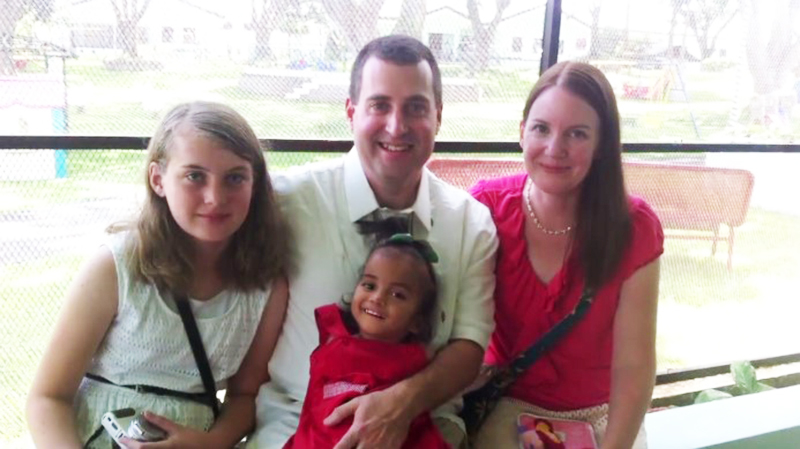 The caregiver at the orphanage was sobbing quietly when she saw this heartwarming moment of Maria finally meeting her new family.

They brought her to their humble abode in Utah, and everything went smoothly, although it took a while for Maria to settle into her new home.

Nevertheless, the challenges have been worthwhile, for “she is so full of light and joy,” said Adrianne.

As time went by, Maria has gotten along well with her siblings, especially with Joshua. In Joshua’s eyes, Maria isn’t different from them; she’s just their little sister.

The adoption of Maria has changed the Stewerts’ lives 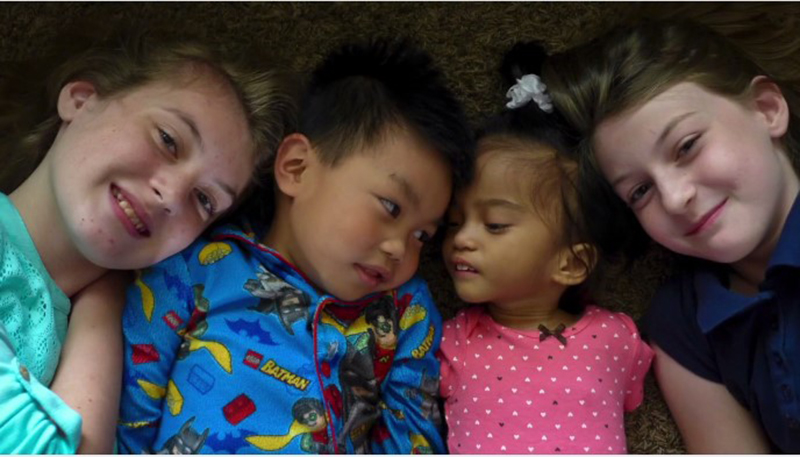 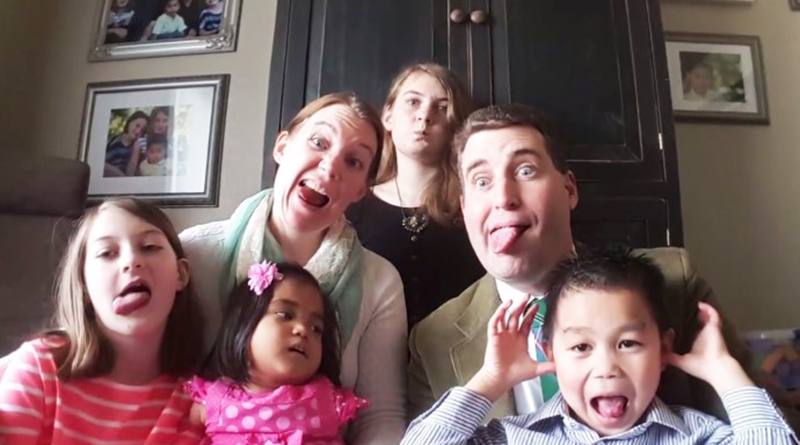 The Stewerts thought the adoption of Maria would change her life … little did they expect it would change their lives too!

After Maria’s first year in her new home, Adrianne posted a video sharing their experience: “Special needs adoption has changed our family forever,” hoping that their story would inspire others to adopt children with special needs.

“She’s very loving,” said Jason. “She loves her stuffed animals; she makes us feed her little bear before we feed her.”

Maria is “so full of light and joy,” and is no different from other kids 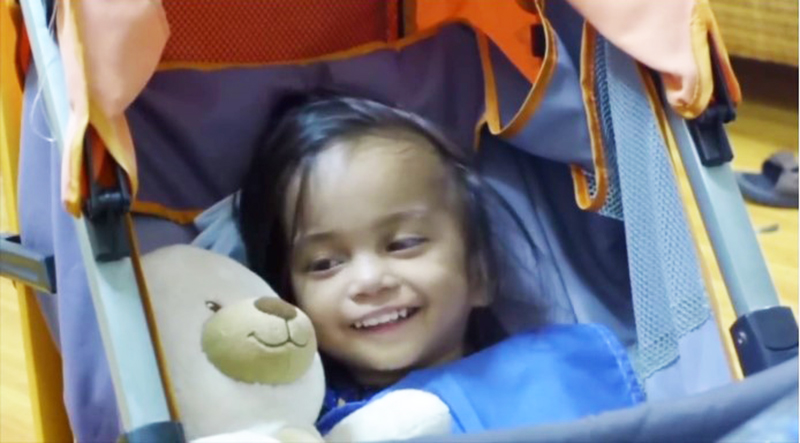 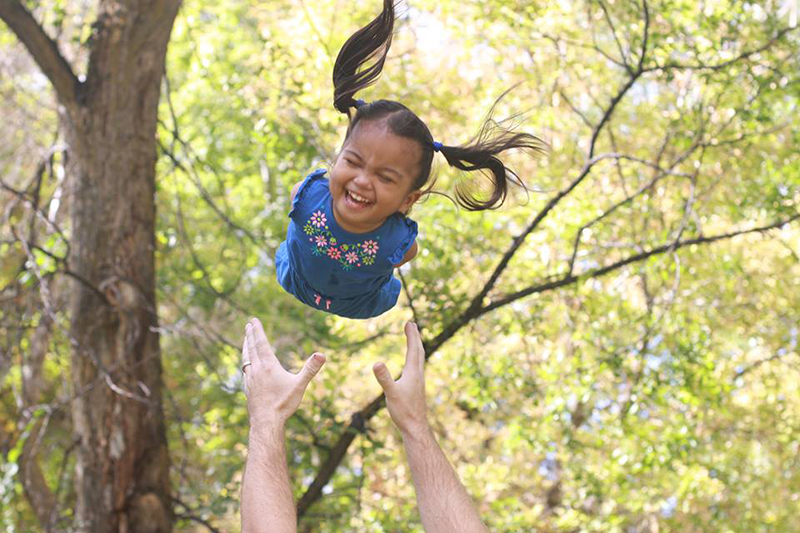 In spite of her disability, “She’s doing all the same things as our other kids, just in a little bit different way,” said Adrianne.

At the age of 3, Maria attends preschool and has regular physical, speech, and occupational therapy sessions once a month. Besides playing with her stuffed animals, she has a particular liking for 80s music!

She can feed herself with a self-feeder, play with a computer tablet, and loves coloring using a customized mouthpiece specially designed by a dentist. She has even tried horseback riding with Dad!

“We put limits on her abilities and then we see her doing exactly what we thought she was not capable of,” wrote Adrianne.

Maria can do many things by herself, including controlling her customized wheelchair using her arm nub 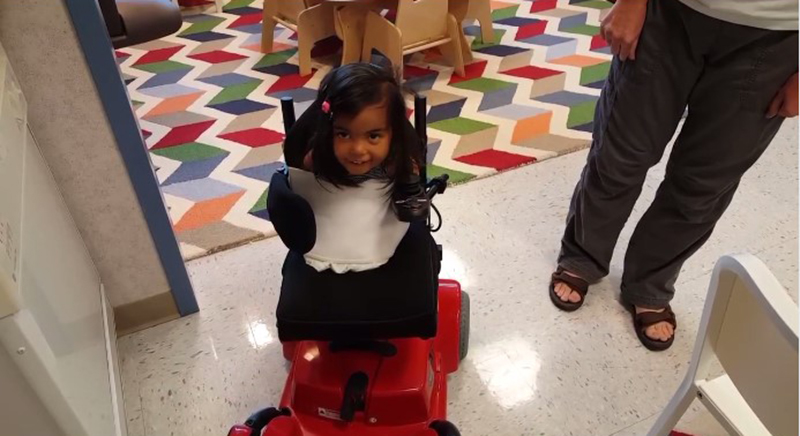 She can control her customized wheelchair given to her from Shriner’s Hospital using her arm nub with ease.

“She has made each of us better. She has taught us to find joy in small things, to not be sad or disappointed by what we don’t have, and to not take for granted the things we do have,” wrote Adrianne. “The most important thing she has taught us is that we are all so much more capable than we think we are.”

After feeling a sense of fulfillment with Maria around, the Stewerts received devastating news: Their adopted boy, Joshua, was diagnosed with acute myeloid leukemia 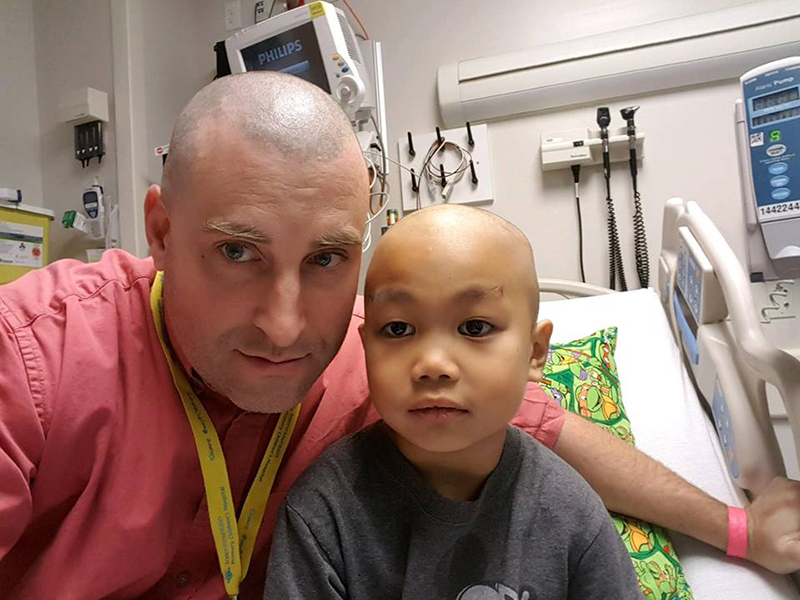 The Stewert family had felt fulfilled and happy with the adoption of Maria until recently, when Joshua was diagnosed with acute myeloid leukemia, with a 65 percent chance of survival.

“And just like that our perfect world was shattered,” Adrianne told PEOPLE. “Our entire world was turned upside down.”

Maria loves to visit her brother, Joshua, at the hospital 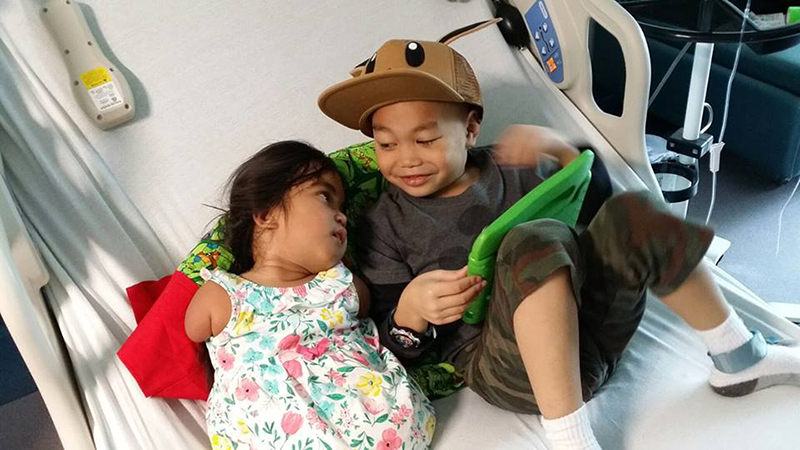 Maria visits Joshua in the hospital frequently. “She practices using her wheelchair in the hallway of the hospital. We’re all in this together,” said Adrianne.

Despite the devastating news, the Stewert family remains positive 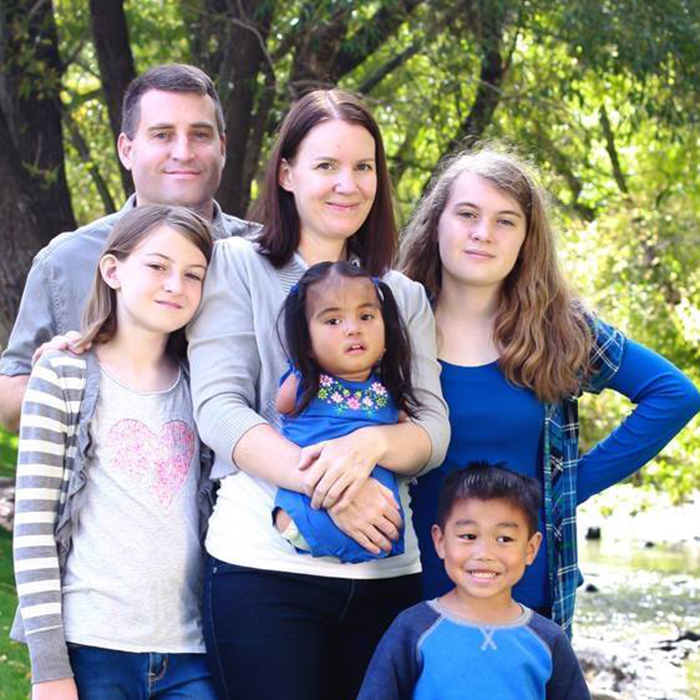 Despite the distress, the whole family is braving this tribulation together.

Jason wrote on Facebook: “We do not know what is to come in the future, we hold high hopes of what he will become. While we are aware of the possibilities, we choose to focus on the positive. This has been beaten before and will be beaten again.”

This “rollercoaster” bridge in Japan is so terrifyingly steep it’s making...

Custodian lost son in theft—now if she sees homeless students, she...