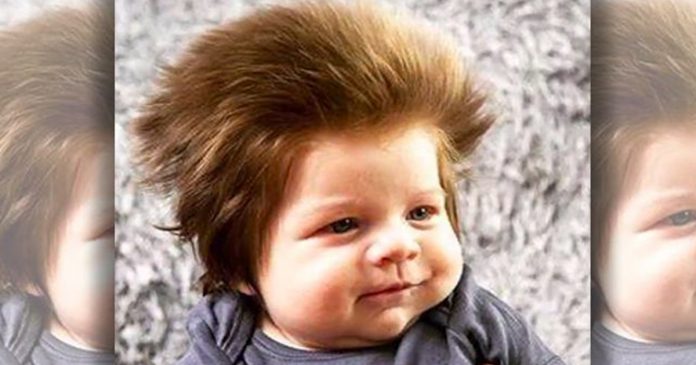 When he was only 8-weeks-old, this British baby made headlines because of his full head of hair. By the time he turned 15 months old, he had gone to the barber’s seven times in order to tame his mane. It was not an easy task for full-time mother Chelsea Noon to juggle taking care of her two older sons and maintaining Junior Cox-Noon and his full head of hair.

Noon told The Mirror, “When I take him with me on the weekly shop in Asda everyone does a double-take and says, “Oh my God, look at the baby’s hair,” and they have to touch it. He doesn’t seem to mind and gets a little smirk on his face.”

Passerby’s would stare in awe because of Junior’s bouffant hair. Noon said it grew down at one point but that didn’t last as it only grew outwards like an Afro. 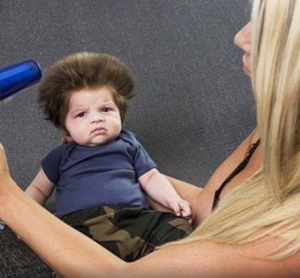 Doctor’s were baffled as they had not seen anything like this previously. Noon was confident that her son’s hair would eventually fall and thin out to normal standards as he grew older because her two older kids have a normal amount of hair on their heads.

She says “He hasn’t lost any though. There’s none in the cot, none in his little chair or the pram, it’s literally just growing and it grows out not down so it sticks up.” 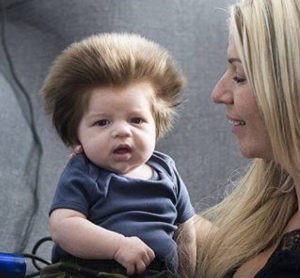 Junior has two older brothers, Mitchell who is four-years-old and Preston who is six. They were born with a normal amount of hair on their heads and they don’t hold the fact that their baby brother has such a glorious head of hair against him.

“His brothers really love him, my youngest is always running up to Junior saying “I want to pinch his fat cheeks.”

“It is really difficult and time consuming to stop it from looking messy. He will spend a lot of money on haircuts during his life,” said Noon

So, what is the cause of the abnormal amounts of hair that Junior sports? Some say it could be linked to the severe heartburn experienced by Noon when she was carrying Junior. A study found that heartburn caused by high levels of estrogen in some pregnant women, can cause a baby to have lots of hair.

“He hasn’t lost any (hair) though. There’s none in the cot, none in his little chair or the pram, it’s literally just growing and it grows out not down so it sticks up”

Regardless of the cause, there is no contention that Junior is an extremely adorable baby. When he grows up, he will grow to appreciate his beautiful head of hair.