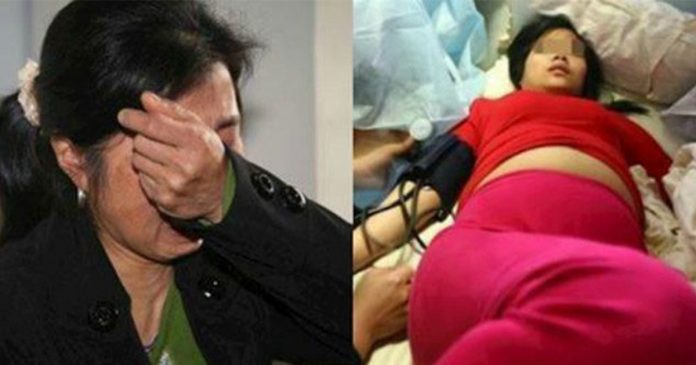 In the past, it was a common thought that a son holds higher status than a daughter and how a daughter-in-law must conform to all her parents-in-law’s orders.

Sadly, there are still some people who think that a woman does not have the right to her own life and must stay devoted unconditionally to her new family once she gets married.

The woman in the story was one of them and this is her tragic story.

Lisa was a 35-year-old woman and she just gave birth to a beautiful baby girl last October. After the delivery, Lisa was given health supplements by the doctor to speed up her recovery and to provide extra nutrients that she would need to breastfeed her daughter later on. The doctor also told her to stay for a few days in the hospital since she had a rough delivery and they needed to monitor her health.

However, her mother-in-law and her husband did not agree with the doctor’s instruction, especially her mother-in-law who said to Lisa: “It is a natural childbirth. There is no need for you stay in the hospital any longer. You can just go back home tomorrow.”

Lisa was disappointed to hear her mother-in-law’s harsh words. At that moment, she wished that her own mother was there for her instead of her insensitive and unsympathetic mother-in-law.

When Lisa’s husband requested for her early discharge, her doctor opposed their decision as Lisa did not fully recover from the delivery yet and they needed to monitor her before they could allow her to go back home.

However, her husband and her mother-in-law were firm with their decision to get Lisa back home as soon as possible.

“It is just the same routine for Lisa and her baby. Another day in the hospital would cost more money while we can just take care of her at home like you do here,” the mother-in-law said to the doctor.

Yet, when Lisa returned to her home, she could not get a proper rest.

It is important for a new mother to get a rest to recover the lost energy during childbirth and to fully heal her body after the strenuous labour. However, Lisa was the opposite. As soon as she got back home, she was asked to assist with some house chores.

Lisa was also frustrated that she could not take care of her newborn daughter. Often, she did not have time to feed her baby since she was too occupied with the house chores.

Plus, her husband and her mother-in-law never liked the idea of hiring a maid to do the chores as they thought it was a huge waste of money when Lisa could do everything

Even though her husband knew that Lisa struggled to do all the work with her health condition, he thought that it was something that Lisa should do as a wife. Lisa was frustrated as her husband did not want to hear her out. Often she felt like asking her own mother to stay at her house but she was afraid that it might cause a conflict with her mother-in-law.

One day, she felt unusually tired. Her head was pounding as if it was going to explode anytime. So, she asked her husband and her mother-in-law to eat first while she went to the bedroom to rest.

However, as soon as she arrived at her bedroom, she collapsed on the floor.

Suddenly, her baby daughter cried out of hunger to which her mother-in-law yelled: “Her baby is crying and yet she can still continue sleeping. Useless woman!”

Instead of tending to the baby, her mother-in-law and her husband continued to eat. The baby was still crying after they had finished their meal. The mother-in-law then shouted: “Hey, time to wash the dishes!”. But Lisa remained lifeless on the floor.

Her husband then started to sense that there was something wrong with his wife so he went to their bedroom. To his horror, he found Lisa lying on the floor, motionless and not breathing. He then quickly took his wife to the emergency.

Unfortunately, Lisa was announced dead when she arrived at the hospital. Further examination revealed that Lisa had suffered from extreme fatigue and stress which caused her heart to become weaker.

Her husband who did not believe that Lisa had passed away suddenly broke down into tears. “Forgive me, Lisa. It was all my fault. Forgive me, I was wrong…” he began crying  hysterically.

Soon, Lisa’s parents arrived at the hospital and discovered their daughter was dead.

Upon finding out the reason, they could not hold their anger and resentment towards her husband and her mother-in-law and decided to take the case further in court

Lisa’s husband and mother-in-law must be punished for their selfish act and negligence of Lisa’s well-being as a first time mother who had just delivered a child.

This story tells us that a selfish act can never solve anything. The fact that her mother-in-law and her husband refused to listen to her although she was obviously still weak from the labour shows that how irresponsible and unsympathetic they were to Lisa.

While many think that a wife should serve her family and obey every word of her husband, it is important to point out that this practice is no longer practical in these modern days. Marriage is a sacred bond between two souls held together with love, faith and respect.

Plus, a wife should never be treated as a property by her husband and her in-laws. Imagine marrying someone so that the husband could treat you as free labour to serve him and his family. This does not only goes against the wife’s rights but it also goes against the essence of a marriage institution.