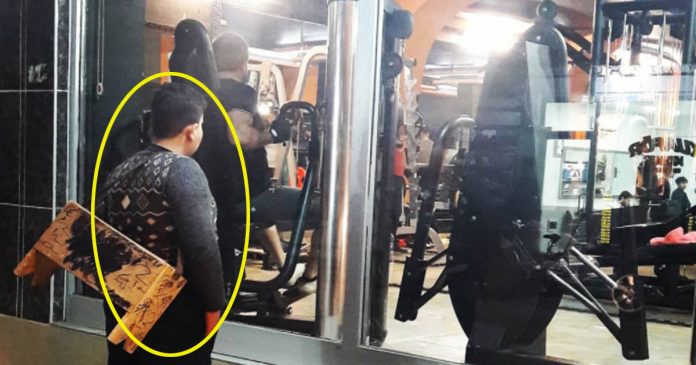 A picture is worth a thousand words and is far more valuable nowadays with the advent of social media where a picture can be shared with millions of people globally in an instant. They have the power to communicate entire feelings and concepts without the need to share a common tongue.

Recently there was a photo taken by a 28-year-old carpenter named Omer Yavuz which went viral almost overnight.

The image he took depicted a young boy who had his back to the camera and was staring into a gym window.

He was clad in a ragged sweater, pants and slippers even though temperatures at the time was near freezing.

Yavuz posted the picture on Instagram saying “It broke my heart and I wanted to share it with everyone.” He told BBC in an interview “I wanted people to see Muhammet with sandals on his feet in the cold.” However he did not foresee that the photo would gain this much attention.

So much so that it had caught the attention of the gym owner Mustafa Kucukkaya. The gym is called Olympiat Sports Center and it is located in the southeast Turkish city of Adiyaman.

He was so moved by the photo that he asked Yavuz for the original image in order to post it on his Instagram as well. He wanted to track down the boy and captioned hid post, “If anyone knows this brother, please get in touch with us.”

He continued “We know that feeling very well. He will have free access to our gym club for a lifetime”

The Turkish media didn’t disappoint and soon the image of the boy was everywhere. A member of the gym stumbled upon the boy working as a shoe-shiner on a sidewalk and coaxed him to come to the gym. He did not know that a photo of him had gone viral but all was explained in the gym.

The boy was 12-year-old Muhammed Hussein who is a Syrian refugee. He and his father had fled their home and came to Turkey for survival. His father collects and sells scraps of paper and metal he finds in trash bins. Hussein works full-time as a shoe-shiner and is most likely not enrolled in school because he has to earn a living.

The boy and his family left their city in Syria, Deir Azzor, five years ago in order to save themselves from the violent civil unrest that is happening in the country. Since Turkey opened it’s doors to the plight of refugees from Syria, the country has received millions of Syrians to their country. The Adiyaman Merkez refugee camp which is located at the outskirts of the city where the gym is based, has over 10,000 refugees from Syria.

Kucukkaya visited the family’s home and stated that they indeed live in poverty and the family is just barely getting by.

A post shared by Mustafa Küçükkaya (@kucukkaya.olimpiyatspor) on Jan 5, 2018 at 4:38am PST

Hussein told a Turkish news website Hurriyet Daily News, that he was “very happy” to be able to attend the gym and grateful to the staff for being attentive and helping him work out. He said, “I had always dreamed of losing weight and now I believe I can do that by working out.”

Gym owner Kacukkaya also said that since Hussein joined the gym, he has gotten numerous calls from strangers who are offering to help Hussein’s family. Never underestimate the power of a single photo. As for all those people who signed up for a gym membership at the beginning of the year as a new year’s resolution, now you have no excuse!