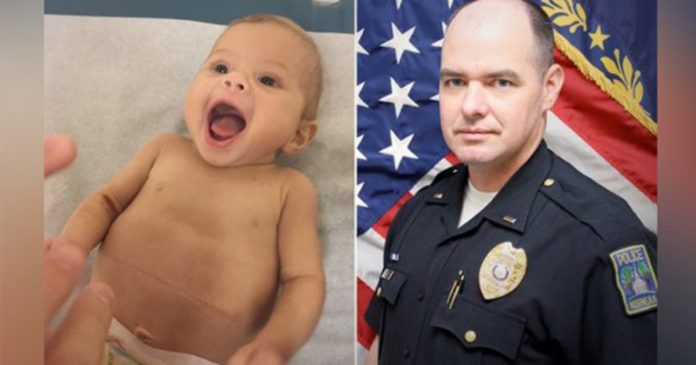 This Massachusetts family faced a difficult situation after learning their 4-month-old baby daughter’s liver was beginning to fail. Through a remarkable feat of generosity, this baby girl will now live a normal and healthy life. 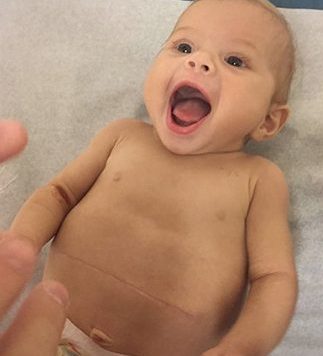 Chris and Sarah St. James gave birth to a beautiful baby girl, Sloan. For the first couple of months after her birth, everything appeared to be normal, and they enjoyed the thrills of parenthood with their newborn. They did what any parent would with a new baby: play peek-a-boo, make funny faces, and poke her cute, tiny belly.

However, after about three months, her parents noticed Sloan’s belly gradually enlarge to an abnormal size

Concerned, her mother scheduled a four-month wellness appointment a little early. “The only thing we noticed was that she was jaundiced…” Sarah said in a report by Boston’s Children Hospital.

Unfortunately, the wellness appointment ended rather abruptly. “The doctor took one look at her and told us, ‘take her to the hospital,’” said Sarah.

Sloan’s parents drove to the Boston Children’s Hospital in Boston, Massachusetts. She was immediately admitted and diagnosed with biliary atresia.

Biliary atresia is a childhood disease of the liver in which one or more bile ducts are abnormally narrow or completely blocked. If untreated, this condition will lead to total liver failure.

Doctors immediately placed Sloan on the liver transplant list and started searching for a living donor. Both of her parents were not a match with her O-type blood.

However, the St. Jameses did find one potential donor, the brother of a close friend

Unknown to the St. Jameses, a police officer over 100 miles away was finishing the final stages of an evaluation and approval process to become a donor. Lt. Steve Tenney of the Keene, New Hampshire, police department decided to go above and beyond the call of duty to help save this baby girl.

News of Lt. Tenney’s match and transplant approval came at the perfect time, as Sloan’s liver was shutting down. Doctors preemptively booked an operating room, and after Tenney’s approval for the transplant, they immediately went to work.

Steve successfully donated 19 percent of his liver to Sloan.

There were no complications during either of their recoveries, and Steve’s liver will grow back, as it’s the only organ that can regenerate

“I don’t think of myself as a hero. I did what I had to do. Even my 10-year-old son was unfazed by it. He told me, ‘Saving lives is part of your job,’” Steve said, recalling a conversation he had before the surgery with his son.

The St. Jameses and Lt. Tenney share a unique familial bond—they even invited Lt. Tenney over for Thanksgiving.

Little Sloan, now 7 months old, will always have a piece of this remarkably brave police officer inside of her