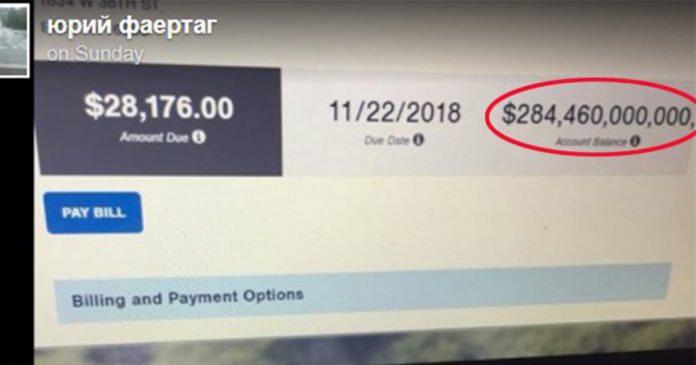 A Pennslyvania woman was shocked when she received her electricity bill this week.

Mary Horomanski, 58, had to do a double take when she discovered that she owed Penelec, her electricity provider, more than $284 billion—an amount greater than the national debts of Hungary and South Africa combined, reported Go Erie.

“My eyes just about popped out of my head,” Horomanski to the newspaper.

The “good news” was she didn’t have to pay the full amount but instead a minimum payment of only $28,176.

After receiving the bill, Horomanski initially questioned whether her electricity provider had increased their rates.

“My question would be to send to Penelec … Have your rates increased. If so has anyone been notified? Because I’m pretty sure this bill alone reflects much more than that. If I’m not mistaken, it’s probably higher than the national debt. Although you actually give us until Nov. 22, 2018, to pay that but you’re looking for a current amount of $28,000 plus. So if we sell everything we own & then some just maybe in 100 years it just may be paid off,” she wrote on a Facebook post on Dec. 15.

The 58-year-old quickly notified her son, who contacted the electricity provider and told them about the bill. They assured her that it was only an error.

Horomanski’s bill was quickly rectified to the correct amount of $284.46.

A spokesman for Penelec’s parent company, First Energy, told Go Erie he suspected that the error was caused by a misplaced decimal point.

“I can’t recall ever seeing a bill for billions of dollars,” spokesman Mark Durbin said. “We appreciate the customer’s willingness to reach out to us about the mistake.”

Horomanski jokingly said the eye-popping bill has caused her to ask her son for a different Christmas gift this year, reported the newspaper.

“I told him I want a heart monitor,” she jokingly said.