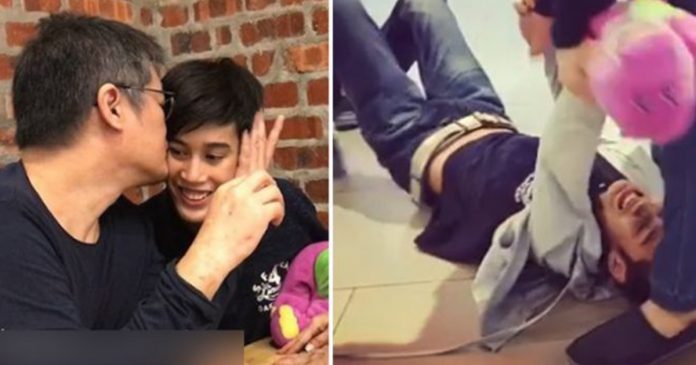 As we know, educating and caring for children is fraught with numerous challenges. It is physically and mentally demanding therefore parents should have high tolerance when it comes to raising their children. It is not an easy task to care of a child especially if they are diagnosed with having autism.

Children with autism have their neuropsychological development challenged which indicates they have an inability to communicate with others and this indirectly inhibits their development. These children also develop restricted and repeated behavioral habits.

Raising a special child requires a high level of patience. As shown by Iman Wan on Instagram and Facebook, his son who has an Autism Spectrum Disorder and ADHD is sometimes difficult to control. However, having a child with a Autism Spectrum Disorder and ADHD (Attention Deficit Hyperactivity Disorder) dis not stop Iman Wan from raising his child with unwavering doses of affection.

He uploads videos that feature his daily activities and how he raises his child on his social media platforms i.e. Instagram and Facebook

PART 1 . We were a little late getting Adam’s lunch yesterday. I was worried he would snap into a meltdown. True enough as soon as we parked the car, Adam showed signs of instability. We rushed our way towards Dave’s Deli. Unfortunately before we could get into the restaurant, Adam went into a meltdown and went to the floors. It was pretty bad so I tried to bring him back into the car. He was on the floors of the parking lot. Took us about 15 minutes to contain him. When he got a bit tired, I took him into Dave’s Deli where the mother quickly fed him a plate of spaghetti. We then applied some doTERRA calming essential oils on him. He was stabilised. But the entire saga was a very exhausting one. Mamarai and my hands were scratched by Adam. He was always apologetic after he hurt us. . This is a 3 part posting. Do follow and watch the next 2 related postings. . #adamsautismfamily #doterrafamily #autismfamily #autismlife #meltdown #essentialoils #doterra_aof #calmingoils #patience #davesdeli @idanixh @raidoterra @arenalieya

Through his post, Iman Wan was not shy to reveal to the public about his son’s condition. The illness that his child suffers from has not made him distance himself from his special child.

Most of the videos shared by him show him and his wife raising their child who was diagnosed with autism. He said honestly that it is a challenge.

Part 2 . Here’s the video with scenes from Adam’s meltdown at the Atria Mall yesterday. I have to restrain him by pinning him down to the floor. Otherwise he will run, he may smash things, push people, and get himself hurt. During a meltdown, Adam is unable to control his actions. Most of the time we showed videos of him on the floor when he was cheeky and playful. This one is different. He was going into a meltdown. Adam is so strong. It takes a lot of strength and concentration to hold him down, and at the same time worrying about everybody’s safety, including Adam and myself from getting hurt. I need to be very calm too. It’s very hard to manage a meltdown in public places. This lasted about 15 minutes. He has not had lunch yet. When he finally started calming down, I took him back up to Dave’s Deli for his meal. This is what some of us Autism parents go through every now and then, just to have a simple meal at the mall. . This is part 2 of a 3 part video. . #adamsautismfamily #doterrafamily #autismfamily #autismlife #autismawareness #autismacceptance #autismfriendly #meltdowns #patience #davesdeli @idanixh @raidoterra @arenalieya

Calming Adam was a daily struggle. I remembered how frustrated and helpless we felt those days before we had the oils. There was nothing we could do except increasing his dosage of suppressive drugs. Looking back, I am amazed how we survived. How I wished we had found doTERRA back then. We could have done much more for Adam. . We are truly thankful now that we have come to know about these amazing certified pure and therapeutic essential oils. I can’t tell everyone enough how happy and hopeful we are now except to continue to do our little part in sharing the blessings of these gifts of the earth to as many people who can relate to us. It’s real. It works. It’s life changing. Thank you doTERRA. . #adamsautismfamily #doterrafamily #autismfamily #autismlife #meltdowns #calming #essentialoils #calmingoils #oilsforautism #adamlovesdoterra #doterramalaysia #doterra_aof #grateful #thankful #hope @idanixh @raidoterra @arenalieya

He will run, strike people around and hurt himself.

Calming Adam is also a daily activity for Iman Wan.

Good morning all. Love this quote and just like to share with all. Sometimes we take this for granted. I realise there are many out there who don’t have a home or someone to call family who they love and will love them back. If you have these blessings, cherish and protect them always. Remember that they don’t have to be perfect to the world. They just have to be perfect in your heart. Perfection is the ability to see the goodness in everything. I am thankful and grateful. Alhamdulillah. #adamsautismfamily #doterrafamily #autismfamily #autismlife #family #home #love #cherish #gratitude #thankful #protect #oneness #positivevibes @idanixh @raidoterra @arenalieya