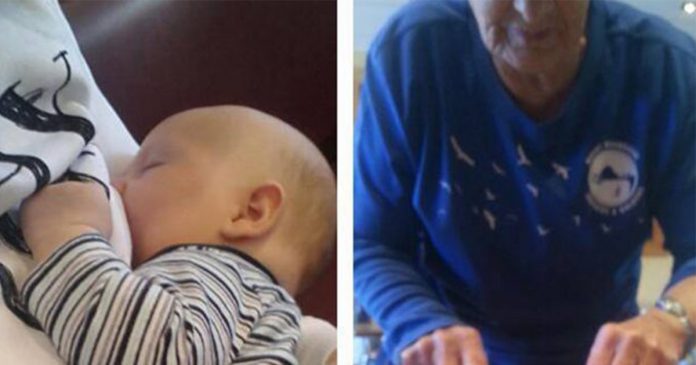 Newborn babies are a joy to behold, but for their tired mothers, those first months are a whole lot more than that! Women go from painful labors to sleep-deprived weeks. And, when they finally go outside to enjoy the fresh air with their babies, they find themselves judged by strangers for how they choose to care for their children!

Little Jaxon McQueen was a feisty 8-week-old boy, and it took all of his mother’s energy to keep him happy and healthy.

So, when Briar Lusia McQueen, Jaxon’s mom, decided that she had to get out of the house for her own sanity, she took him with her to the nearest diner for breakfast

The boy had been fed before they left the house, so Briar expected some peace for the next hour or two. Unfortunately, just as her food and hot chocolate arrived, Briar sensed her baby waking up. Before she could have a single bite, Jaxon decided that he wanted to be fed too.

Resigned to her fate, Briar put aside her breakfast and pulled Jaxon close to feed him. She hadn’t become used to feeding Jaxon in public yet, but she refused to let her son go hungry just to appease other people’s sense of normality. She decided that she was willing to risk disapproval if it meant Jaxon was nourished.

After several minutes, Briar sensed someone coming towards her table. Looking up, she saw an elderly woman.

Inevitably, Briar’s first thought was that she was about to be chided for breastfeeding in public.

The older woman smiled at Briar and complimented her on being a wonderful mother. She also added that she felt bad about watching Briar’s food grow cold. That’s why the lady thought to come over and cut the food so Briar could eat with one hand.

Never having expected such a thoughtful gesture from a complete stranger, Briar was almost brought to tears.

Then, when she got home, she decided to share the story with her family and friends on Facebook

Her post, and the accompanying picture of the older woman cutting her food, got more attention than Briar had expected. And soon, Love What Matters Facebook page picked up the story and made it viral.

The comment section filled with experiences of mothers around the world, some wonderful and some infuriating. But through it all, everyone agreed that Briar’s post gave them hope. It wasn’t just about a stranger being kind, it was also beautiful to see a woman reaching out to help another woman.