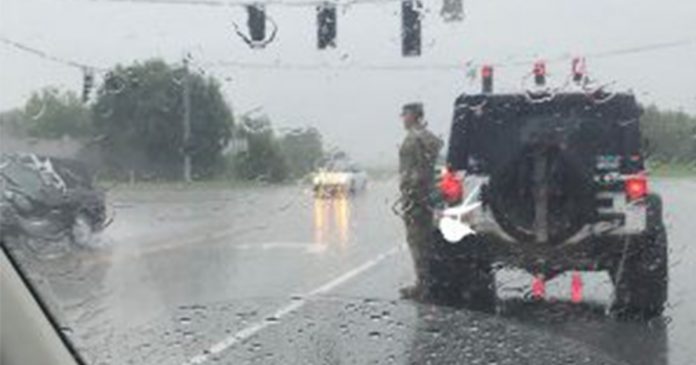 A soldier from Vine Grove, Kentucky was captured standing at attention and saluting a funeral procession which was passing an intersection. The photo of the soldier has went viral on social media as he was hailed as a ‘true hero’ and a ‘class act’.

During a funeral procession, Col Jack L. Usrey stopped his vehicle and got out into the pouring rain to stand at attention and pay his respects. He stood saluting in the downpour until the last vehicle in the sequence had passed him and only then did he get back into his jeep and continue his journey.

Vine Grove resident Erin Hester took the photo of the stoic soldier as she was parked behind his vehicle. She pulled out her camera and took the photo as she felt ‘completely touched’ by the devotion of this soldier and shared it her Facebook.

Hester had told CNN in an interview “We had come to a red light when the intersection was blocked by our local police department,” and “The procession lasted at least a minute and he stood the entire time at attention.” 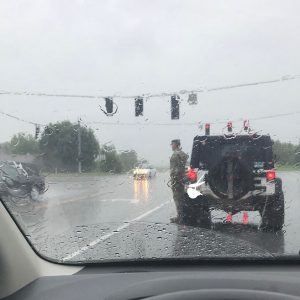 Erin Hester shared this picture on Facebook with the caption: “I was so completely touched by this today. A funeral procession was passing by and this soldier got out of his jeep to stand at attention in the pouring rain. I always get frustrated when I see cars that don’t pull to the side and stop for a procession, but this gentlemen went above and beyond. I feel pretty confident that there isn’t a military rule that soldiers have to do this. This made my heart happy to see the amount of respect that this gentleman showed a family that he doesn’t even know.”

Hester made the post public and it has been shared more than 120,000 times. Multitudes of netizens commented on the post thanking Hester for sharing this moment and hailed the soldier as a “true hero” as he had no obligation to do what he did.

Usrey told National Guard officials “I didn’t really think,” and  “I just did what my parents taught me to do growing up.” He did not give his act a second thought and was surprised that someone had taken a photo and that it had gone viral.