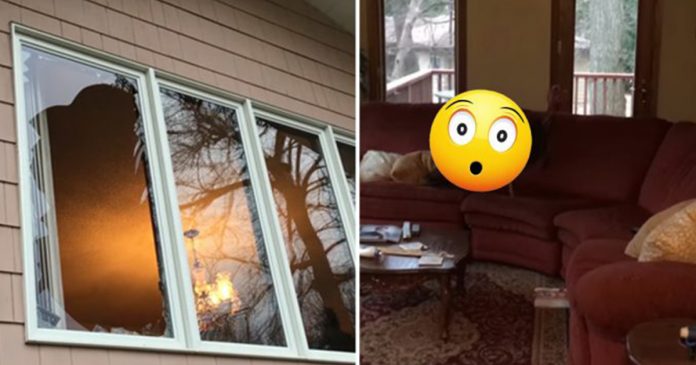 When a most unlikely “intruder” broke into a house in Minnesota, he wasn’t in any hurry to grab the loot and get out; on the contrary, this one settled himself in comfortably on the sofa, refusing to budge until police backup arrived. Afterward, they noticed traces of feathers left behind, and “fowl play” was suspected.

A couple, Barry Peterson and his wife, from Shorewood, had just returned home from vacation when they noticed the front window of their house had been smashed in. Judging from the looks of things, it seemed as if someone had broken in while they were away.

Unsure if the intruder was still inside, they approached the door with caution 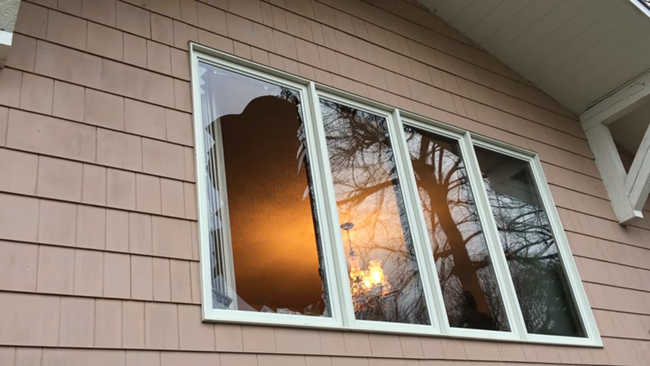 Once inside, they saw that the intruder was still there, and he had made himself comfortable on their sofa! This was no ordinary human burglar however; this one was feathered and made a “gobble-gobble” sound—it was a wild turkey!

The couple didn’t know what to do, so they called the police 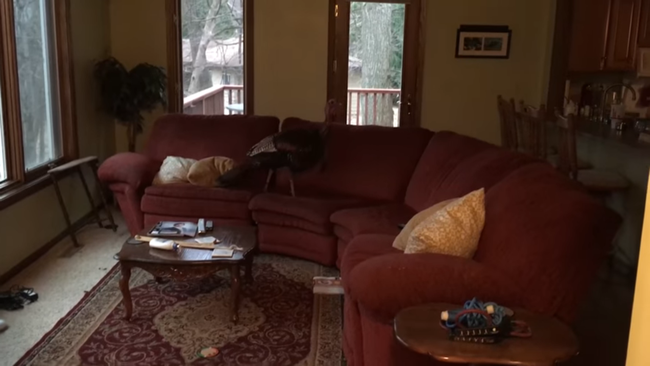 “It’s kind of an odd request,” Peterson’s wife told the emergency operator. “I don’t know if I should call you or what, but we just came home from being gone, and a wild turkey flew through our front window and is now in our house.” 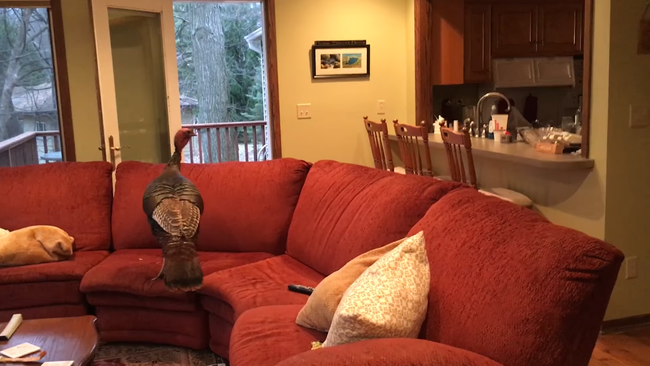 Soon, a police officer arrived on the scene. Amused, he asked if he could snap a few photos.

“A Shorewood resident came home to find a broken out window to their residence. Shortly after they located an unusual guest lounging on their sofa,” South Lake Minnetonka Police Department later wrote on their Facebook page. “He identified himself as Tom.”

“We’ve got two ways for him to go out, and he just won’t go either way,” Peterson told the officer 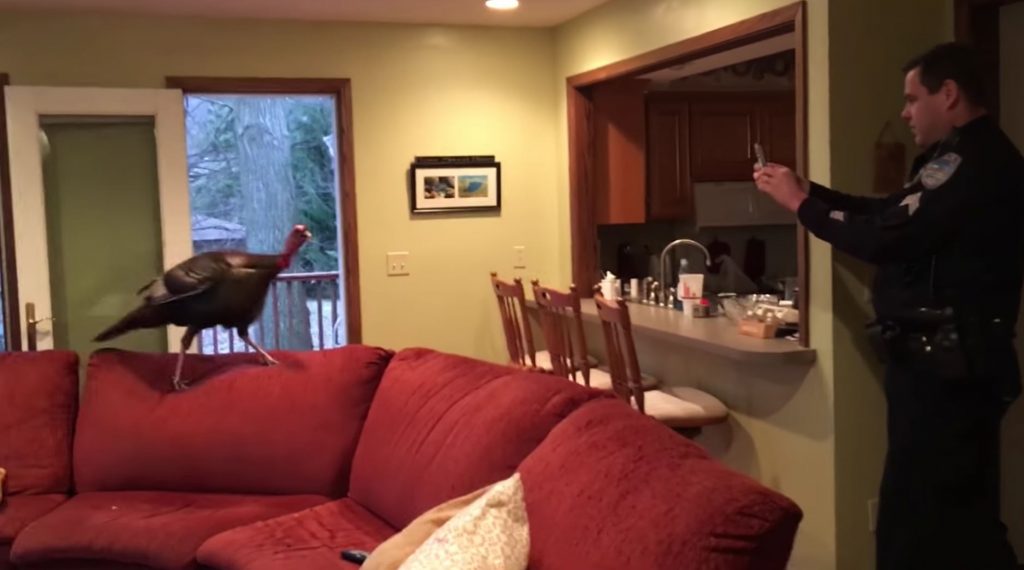 After having taken a few snapshots, the officer put on some gloves and coaxed the turkey, “Out the door, buddy,” gesturing toward the door, but it was to no avail.

Soon, two more officers arrived, and one of them flashed a strobe light at Tom, and that did the trick! The turkey finally hopped down off the sofa and flew out the door. 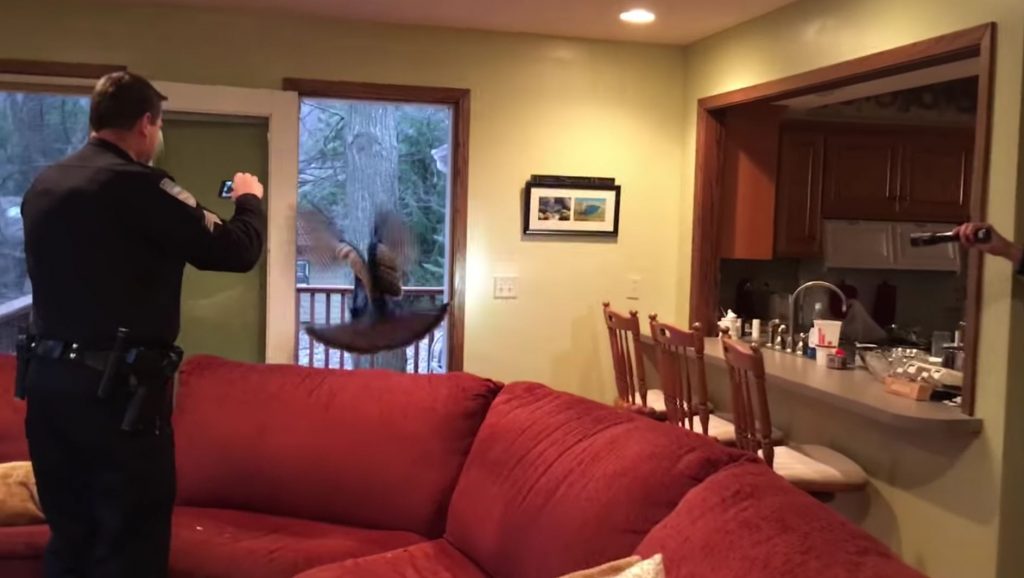 “Tom later left the home on his own and found a better spot in an oak tree. The wild turkey was not injured,” the police said.

When Facebook users saw the police department’s post, some joked festively about having the bird for Thanksgiving 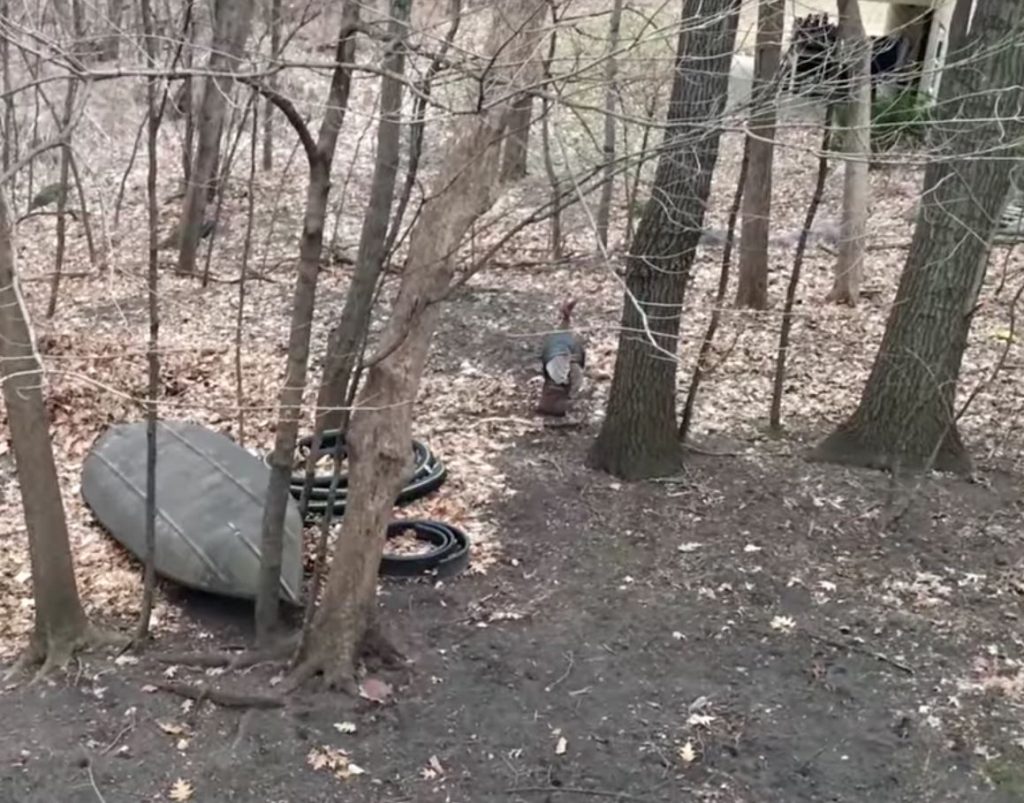 One wrote, “Tom was arrested for breaking, entering and probably pooping in the house. Tom will be doing his sentence over Thanksgiving dinner!”

As for how the owner felt about the feathered intruder, Peterson told The Dodo, “It was a very interesting experience!”

Watch the whole fiasco in the video below:

Filipina lady and her partner build “island sanctuary” for 106 stray...