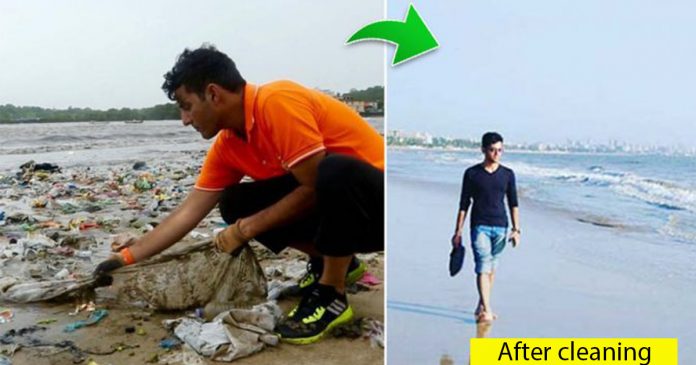 Litter is an umbrella term which consists of any kind of waste products that are not disposed of appropriately. This encompasses anything and everything ranging from a piece of plastic thrown by the roadside to tonnes of waste that finds their way to our oceans.

This carelessness of not paying attention to the seriousness of the issue of inappropriate waste disposable is already having a tremendous negative effect on our environment. There will be catastrophic consequences if our population refuses to change our attitudes towards environmental conservation by way of reducing waste and properly disposing them. 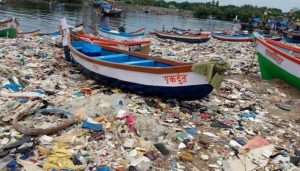 Tangible proof of the devastating effects of improper waste management can be found along Versova beach in Mumbai, India. This beach which was known for its pristine waters and sand can now be compared to a dumpsite as it had been contaminated with rubbish of all kinds thrown unto the shore by locals and fishermen alike.

It seemed that no action had been taken by the authorities to remedy this situation and therefore two men decided to take matters into their hands. Afroz Shah, 33 and his neighbor Harbansh Marthur, 84 had had enough of seeing the beach strewn with copious amounts of rubbish on its shores and decided to act.

Afroz Shah clearing up the waste on the beach 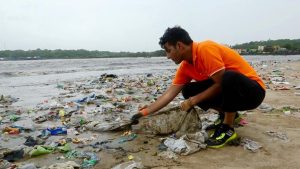 Afroz works as a lawyer and he was driven to change the way the beach has been disregarded and used as a landfill. He made the decision to change the strip of land which was located opposite his apartment for the better.

Within just 69 weeks, Afroz Shah had managed to clean 52 toilets and over 4,500 tons of garbage off the Versova beach. This feat was not the product of a single person but a collective of ocean-lovers from around the neighborhood. Though it was the effort of many people, it took one person to serve as a catalyst in order to spark action. It was because of this that the United Nations Environment Program (UNEP) took notice and began to aid their efforts.

What was once dubbed one of the filthiest beaches in the world has now been restored to pristine conditions and it took one man to start it all. Afroz Shah was awarded the highest honor by the UNEP which was a medal stating “Champions of the Earth” in Mexico. Apart from that he was also the first Indian to have been recognized and given the award by the UNEP and it was well-deserved.

Volunteers helping to clear the beach 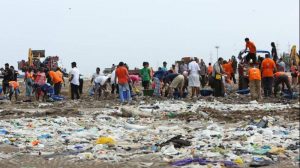 According to Afroz “There is a difference between discussing the environmental policies for sustainable development versus getting your hands dirty and doing the ground work.” He had discussed among a few of his neighbors in an effort to persuade them to join in the effort of clearing up the beach to which they agreed. Together they started the monumental task of clearing up the 2.5 km of shoreline. The garbage they found strewn across the beach were things like plastic bags, cements, clothes and so on.

Before and after pictures of Versova beach 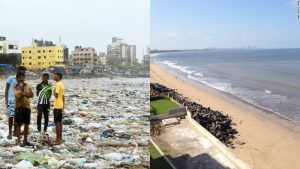 It started with the effort of two people which then became a group of 40 regular volunteers who meet up every Saturday to help keep the beach clean. After six months, this movement was formed into a group known as the Versova Residents Volunteer (VDV) and is led by Afroz. Individuals from all around are welcomed to volunteer and be a part of this collective who help clear Versova Beach.

Their venture even caught the attention of authorities who had turned a blind eye on the beach for nearly 70 years. They provided assistance in the form of providing the volunteers with trucks, machines and a further 69 workers to aid in the clearing up of the beach. 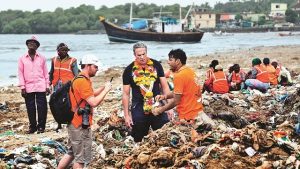 The UNEP representatives themselves made their way to Versova beach in order to see for themselves the progress that the residents are making. In addition to cleaning the shoreline, VDV has also cleared mangrove swaps nearby which has now been restored to their role as being a wave barrier. VDV is not stopping with Versova beach though as they are making plans to prevent locals from littering and disposing waste inappropriately on a larger scale.

This inspirational act of one man had the power to initiate a lasting positive effect on the environment and the ability to change the mindsets of a large group of people for the better.

A German Man Suffered Brain Injury that Left Him with Memories...