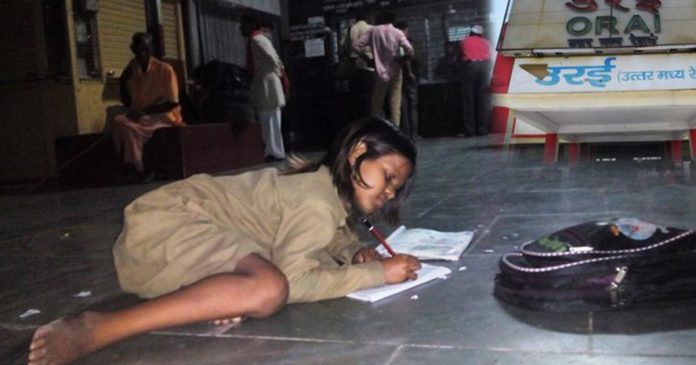 Every night, this young girl never fails to come to Orai train station. With her worn out, dirty cloth, she made her way to the station barefoot while carrying a black backpack.

The girl’s name is Divya and her photo which shows her studying right in front of ticket counters was taken by a man named Rajesh Kumar Singh.

Rajesh was surprised to see the girl studying on the floor of Orai train station. However, Divya seemed completely focused on her homework and did not mind people passing by.

Apparently, Divya lives in a poor neighbourhood and there is no electricity in their house so she comes to the train station for its fluorescent light to study, so she said when asked by Rajesh.

The train station is located at Uttar Pradesh, the most populated state and one of the poorest in India where a fifth of its residents are from lower class and hold the lowest place in India’s caste system, known as the untouchable

Most of the shops in Fateh Nagla Village, Uttar Pradesh where Divya lives, run on a combination of solar power, battery and sometimes diesel.

At night, they will use kerosene to light lamps but often, the kerosene causes house fire in the village

It was hard to live without electricity and to depend on the dim light of kerosene lamp to study. So, Divya chose to go to the train station every night with her books.

Seeing Divya’s efforts, Rajesh was really touched with her perseverance and willingness to study even if she has to come all the way from her village to the train station just to do her homework. He then uploaded Divya’s picture on his Facebook page and the picture has now gone viral on social medias. It really became an inspiration to other people who are willing to study hard to live a better life.

Indeed, education is one of the many great ways to get her out of the poverty ring and we wish her all the best in her studies and keep up the great efforts!

16-month-old baby boy was seconds away from death after his neck...