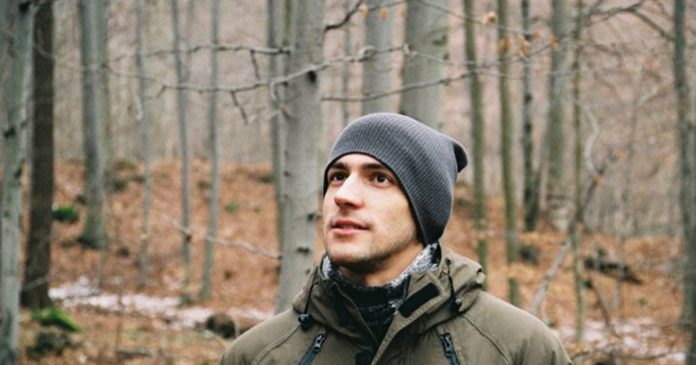 My name is Matúš Benko. I have a wife and young son and we live in Austria, where I work as a postdoctoral researcher at the Institute of Computational Mathematics at Johannes Kepler University Linz. This is my story of how I went from being a self-centered person who disrespected and mistreated women, to a considerate person who has found balance and meaning in life. This is how I fundamentally transformed my life and relationships.

Since my early youth I had many girlfriends, and although most of them were very nice and kind, I always left them for no good reason. In the process I hurt so many people.

Before my 16th birthday, these relationships were basically childish and short-term. My first long-term relationship started around age 17. This girl was very kind, intelligent, and a good person. Throughout the first year of our relationship, we had no major problems, fights, or misunderstandings. Then, when she went away to college, we continued long distance for over a year but eventually I fell in love with another girl and ended my relationship with my girlfriend without much consideration of her feelings.

Recently I was reflecting on these past relationships and realized a simple truth that I could not see back then—I was addicted to falling in love. Specifically, I constantly sought the feeling of falling in love. It was as if I never took into account that I already had a girlfriend, or as if I somehow believed that I shouldn’t control myself. I thought that if I fell in love with someone else, it just meant that I didn’t really love my girlfriend and we were not meant to be together. I thought I should just follow my desires and go with a new girl as soon as I was inclined.

After ending my first long-term relationship, I got together with the new girl that I fell in love with.

But while I was with her, my behavior became more and more absurd. I kept falling in love with other girls over and over.

I did like my girlfriend and cared for her, but overall, I treated her poorly and wasn’t faithful. 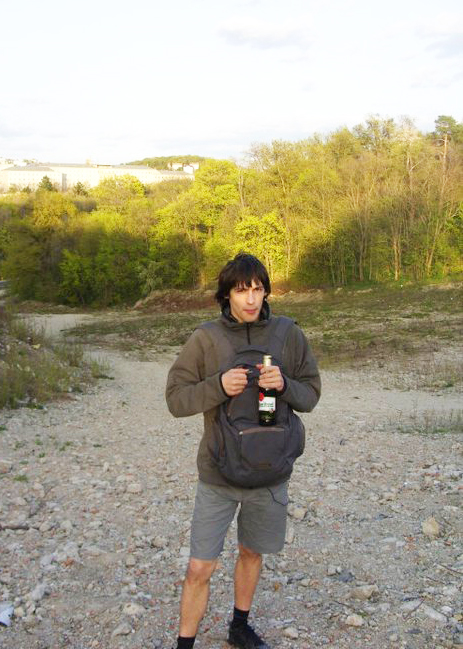 We managed to stay together for almost four years before she finally left. The relationship could only survive that long thanks solely to her incredible tolerance and sacrifice. She kept her heart open and responded to my mistreatment with genuine forgiveness. I guess she even saw goodness in me at times when I did not.

I noticed that her high standard of behavior had a great impact on her—she became more mature and a better person over this period. Meanwhile, I was falling into a very dark place.

Throughout my youth I used to drink a lot. When I was younger, this habit was relatively harmless and fun. Later, however, getting drunk became like “waking up the beast.” I remember several occasions when I got very drunk and completely lost control—I was in a state where I did not care about anything and abandoned all self-restraint. For instance, I hardly remembered that I had a girlfriend, and even when I was semi-aware of it, it held no restraint on me.

I felt as if I had completely lost my human qualities and had been taken over by a dark, selfish force. It was very destructive and disturbing.

While I always used to think of myself as a good person at the core, even though I did many silly things, as time went on I began to believe that I was actually the opposite of good. I was doing things I once considered terrible and never imagined I would do. However, I was only able to reach this first step of realizing the problem; I did not know of any way to resolve it. I started to believe that I was actually fundamentally bad, and began to identify myself this way.

Finding a Way Out

I believe there is a huge difference between knowing there is something wrong and being able to do something about it, since it requires a genuine will and discipline to change. It is hard to imagine making my way out had I not come upon the guidance and wisdom I eventually found.

What helped me find a way out was a traditional Chinese self-cultivation and meditation discipline called Falun Dafa, also known as Falun Gong. I first became interested in meditation around 2008, when I read the book “Catching the Big Fish” by David Lynch, who was my favorite filmmaker at the time. In the book, he describes the amazing effects meditation had on his life and creativity, and thus I became intrigued.

Later, a friend told me that she did some exercises in a park and they included meditation, and she introduced me to Falun Dafa. At the time, even though I liked the exercises as well as the teachings of Falun Dafa very much, I did not want to seriously follow the practice.

This was because, in a sense, I thought it was too good for me.

Still, over the next five or six years I often returned to the principles I found in “Zhuan Falun,” the main book of Falun Dafa, and they continued to appeal to me.

Finally, in 2014, I put away my hesitations and doubts and decided to practice wholeheartedly. 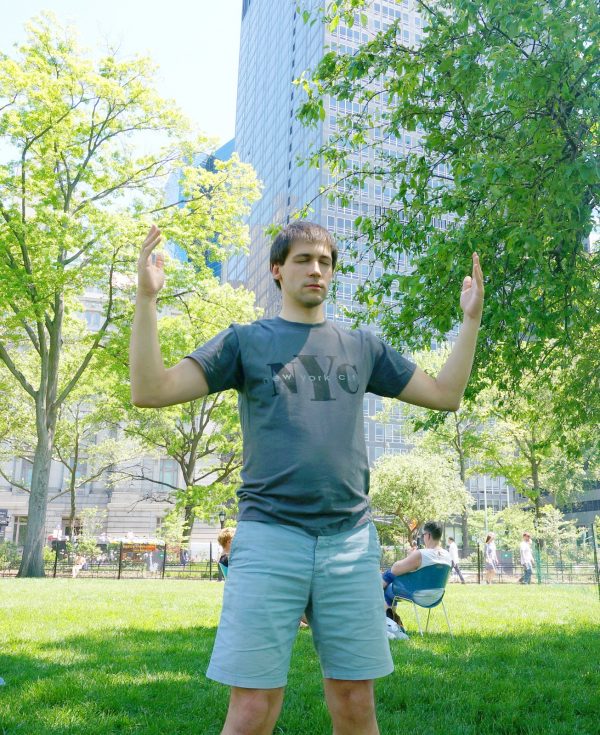 Falun Dafa teaches that you can find inner calmness by assimilating to the characteristics of the universe—’Truthfulness, Compassion, Tolerance’—while letting go of attachments to destructive habits like jealousy, pride, and fear. Through this process one can cultivate oneself by following simple upright principles and return to one’s true nature, or true self.

Perhaps the biggest roadblock I had, and the most essential step, was learning to recognize that the evil man I had become was not my true self.

When I started to genuinely practice Falun Dafa, many things in my life changed seemingly automatically. I used to feel anxiety and a lot of fear, and I had trouble falling asleep. These problems were resolved very quickly and I hardly noticed it.

More importantly, the change of my inner world and behavior resulted in much better relationships. In 2012, I started going out with a classmate from college. I really cherished and appreciated her, and I felt that this was my chance to treat a girlfriend properly. I had a strong sense of responsibility—like I could never forgive myself if I failed her.

After two great years together we got married, and we now have a young son. When it comes to falling in love with other women, I cannot imagine letting that happen because I see this issue very clearly now. When I made the decision that I wanted her to be my wife, I closed all other doors, and my heart is now at ease.

I did not have to push or force myself, and it seems very natural to me because it is part of my commitment to being a good person.

I think the main difference between the way I was in the past and the way I am now is that I am no longer driven so much by my emotions and sentimentality. Rather, I try my best to think clearly and follow the principles I believe in. I take my personal feelings and self-interest more lightly now, and the emotions that once seized my heart have been replaced by liberating compassion.

Overall, the beginnings of my self-cultivation practice felt like breaking from a spell. 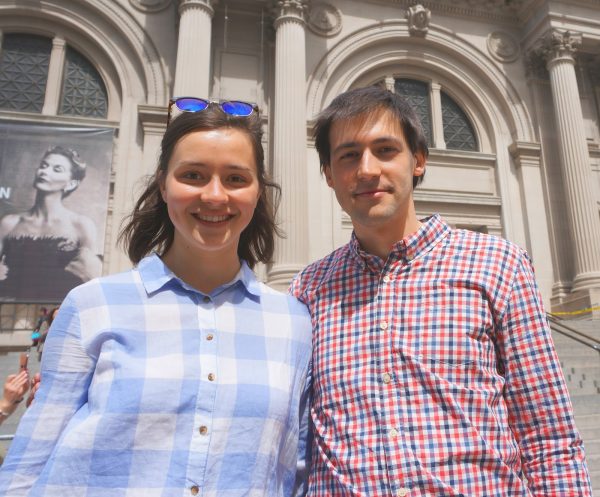 Some people feel that their emotions are very precious, or even that their emotions provide the meaning of life. They may think that being free of emotion means becoming ruthless or inhuman. Certainly, this can happen if someone takes the path of deceit, cynicism, or violence.But when one strives to always consider others first, to look within and improve one’s moral values and inner self, and to learn to take things (including hardships and emotions) lightly, one’s heart becomes purer and kinder instead.

As sentimentality gradually vanishes, the heart is filled with compassion, which is a nobler thing. For instance, if a man is ruled by emotion, he may fall in love with someone on Monday and hate that same person by Wednesday, wishing to never see her again. Falling in love is always based on emotions.

Although the causes of falling in love may vary from physical to mental or spiritual, it is always a result of what you like, or what makes you feel good. Compassion, on the other hand, never changes; it is very calm, solid, and firm. It goes beyond one’s self and is not a result of personal likes or feelings. It is a broad realm that encompasses your friends as well as your enemies.

Self-cultivation is a long process and I still have many areas that I need to improve on (for a comprehensive overview of my flaws, please contact my wife). Nevertheless, the changes in my life that have been made possible thanks to Falun Dafa already seem like a miracle to me. Thank you for this opportunity to share it.