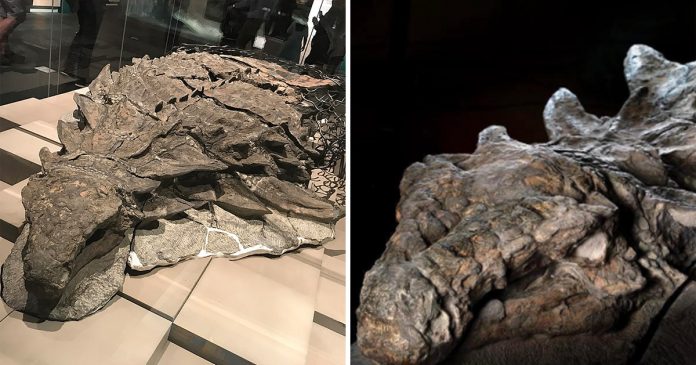 Scientists are hailing this prehistoric dinosaur as the “best-preserved dinosaur on Earth.” In fact, it is so well-preserved that it cannot be defined as a fossil. This magnificent ancient 18-foot-long specimen has been called a genuine “dinosaur mummy.”

The Royal Tyrrell Museum of Palaeontology in Alberta, Canada, recently unveiled a dinosaur exhibit: “We don’t just have a skeleton,” Caleb Brown, a researcher at the museum, told National Geographic. “We have a dinosaur as it would have been.”

Since it was unearthed it has kept its shape; its bones aren’t visible and even some of its innards are still intact.

Researchers are amazed at the extent of the almost unparalleled degree of preservation.

The dinosaur is so well preserved that it “might have been walking around a couple of weeks ago,” Jakob Vinther, a paleobiologist from the University of Bristol, said. “I’ve never seen anything like this.”

The creature was first discovered in 2011 when an oil mine employee named Shawn Funk inadvertently discovered the specimen while at work.

Since then, it has taken researchers six years and around 7,000 hours to conduct tests on the evidence collected and prepare the remnants to be displayed at the museum.

Over 100 million years ago, when this ancient prehistoric creature roamed the earth, it was a member of a newly discovered species and genus named the Nodosaur.

It was a gigantic four-legged herbivore and its body was protected by spiky, plated “armor.” This nodosaur originally weighed around 3,000 pounds (approx. 1361 kg) when it was alive. The mummified nodosaur is so unimpaired that it still weighs 2,500 pounds (approx. 1134 kg)!

The question of how the dinosaur could have remained so intact after it was unearthed still baffles scientists, although according to National Geographic, researchers are putting forth the theory that the creature may have been carried away to sea by a “flooded river” where it sank.

As it lay there undisturbed, the armor and skin were replaced by minerals over the course of millions of years.

This gave it the form that it is currently in, on exhibit.

On display at the Royal Tyrrell Museum, visitors now have an opportunity to observe what is considered to be the closest thing to an original dinosaur. On seeing this amazing specimen, perhaps visitors will be able to vividly visualize the lives and times of dinosaurs, so many millions of years ago.