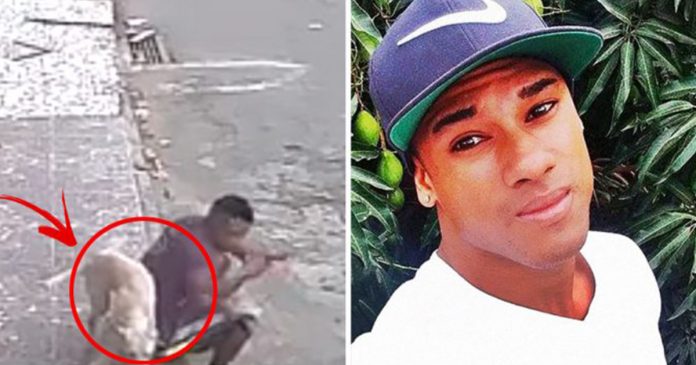 It was very common to see animals mark their territory with their pee but what if the territory is a human?

A man was very annoyed when a stray dog peed on his back.

Heinze Sanchez, 27, was seating on a side of a road when a dog might had mistakenly took him as fire hydrant and relieved itself right on his back.

The incident has outraged him and he nearly kicked the dog out of shock.

Funnily, his kick missed the dog and it quickly fled the scene. Most people may just forget and forgive but not Heinze.

He searched for the dog at the same place he got peed on.

“I looked for him around the neighbourhood, asking if he had an owner,” Sanchez said.

Surprisingly, the dog may have taken a liking on Heinze as it shows friendly reaction when it saw him.

“When I found the dog, I called him and he came to me, wagging his tail.” He said.

He decided to take the stray dog home after playing with it for a while.

“He’s quite docile, stays close to me, cries when I have to leave home. He made a bit of a mess in my neighbour’s home, but he’s a good dog.” Heinze got criticised by the public when a CCTV footage caught him trying to kick the dog after the incident.

He explained that it was a mere reflex and he did not try to harm it.

“I retracted the leg.” It was a reaction of the moment and I had no intention of hurting him. Another puppy came and I asked him, “Did you see what your friend did to me?”

Heinze adopted his new pet and named it Enzo. “I gave him that name because I always said that when I had a child his name would be Enzo. And now, he’s with me, fed and clean.”

Now, Enzo has got a new territory for real!!!

Check out the full video of Heinze and Enzo’s fateful meeting here.