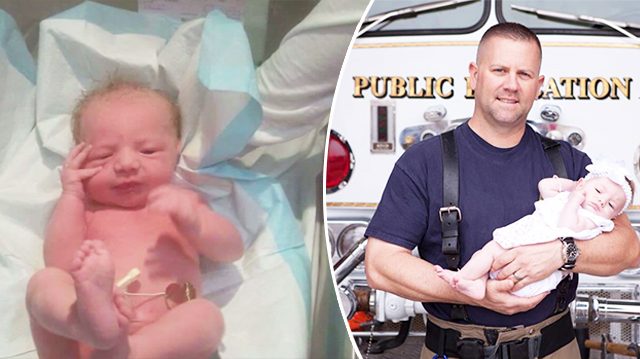 When firefighter Marc Hadden and his wife, Beth, were concerned about never having the privilege to bring up a third child, fate intervened and gifted this loving couple with a beautiful blue-eyed daughter, whom they later nicknamed Gracie.

It was in November 2011 that Hadden, who works in a South Carolina fire station, received an emergency call. When he and his team arrived at the spot, they were surprised to find that they were called to help a pregnant woman, who was about to deliver.

And just as they settled her into the back of an ambulance, the woman went into labor. Hadden realized that she was going to deliver sooner than they were able to reach the hospital.

“We got her on some oxygen, started some IVs and literally as we were getting ready to leave the parking lot in the ambulance, my partner said, ‘We’re about to deliver a baby right here.’ We had no time to prepare. Before we could do anything—we hadn’t even cut her clothes—Gracie came right out. Immediately she was handed to me,” Hadden told TODAY.

The team took the woman and the child to the hospital, where Hadden heard that the baby girl was up for adoption. Hadden and his wife, Beth, had always wanted a third child in their family.

“We had prayed about it for so long,” he told CNN. “We wanted to adopt because we were unable to have more kids. We always dreamed of adopting a little girl.”

When Hadden told Beth about the little one, she replied, “Can we keep her?”

And so, without any hesitation, the couple completed the formalities in order to gain custody of the baby. Two days later, Beth was holding the baby in her arms. She was named Rebecca Grace Hadden.

The couple had decided that they don’t need to hide anything from her.

“We have never hidden it from her,” Hadden said. “If you ask her where she was born, she says, ‘My daddy delivered me in the back of an ambulance.’ She knows the whole story. I wanted her to know as soon as she was old enough to understand. I didn’t want it to be this huge surprise. It still breaks my heart to think of one day having to explain it to her more in depth … because she doesn’t really 100% get it.”

“Our bond is extremely tight. She’s a part of the family, and we love her more than life … We wouldn’t change anything. We would do it all again if we could,” Hadden said, reports CBS News.

With thousands of newborn children put up for adoption each year, it can be hard to find suitable parents. But Gracie is one lucky girl. Over at the Haddens’s, she has found a family who will always love and cherish her.