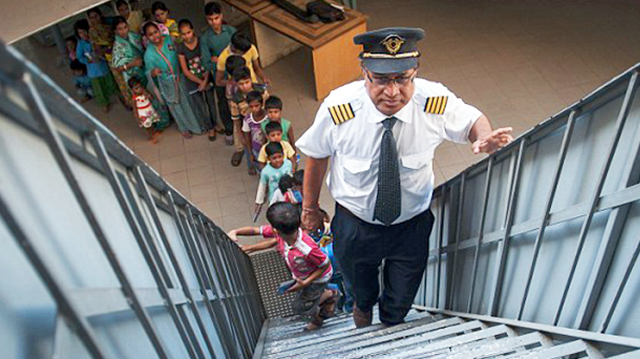 It is strange to see an airplane parked on the road but not inside any airport and Bahadur Chand Gupta is the man behind it!

In the outskirts of New Delhi, a decommissioned Airbus A300 is placed there where poor people can board this staged flight that wouldn’t take off!

In 2003, Bahadur bought this A300 after selling his land to pave way for the poor to take a sneak peek in the aura of flight.

Bahadur was from a very small village and joined the Indian airlines in 1980. During that time, one such incident where a man who couldn’t afford a flight requested Bahadur to take him in. Secretly, Bahadur sneaked the man in but got caught, since then he realised that for a poor man seeing an aircraft was simply a luxury thing.

That is when he decided that all poor people must also experience the flight journey!

Being a retired aircraft engineer, Bahadur even lets small kids in the cockpit of the flight to teach them how it functions! The minimal charges applied by him are according to what these people can afford.

The process remains the same, one would board a flight collecting their boarding passes, welcomed by an air hostess, find their way to the seats, air hostess instructions on the plane, food offered etc! Interestingly, the exit in his flight is through an evacuation for the passengers!

For many poor people who have only seen aeroplanes on TV or merely flying above them, it is a dream come true for them! Thanks Mr. Bahadur Chand Gupta.