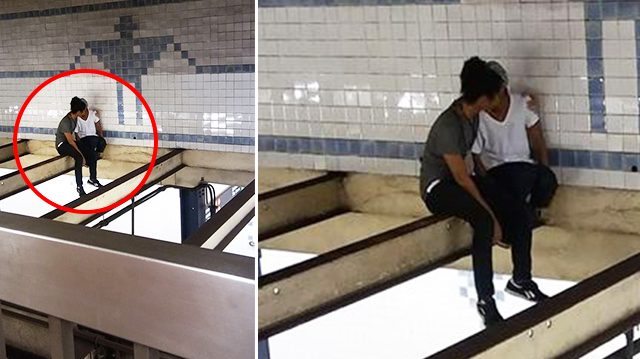 When a young man saw a girl saying “suicidal things” before climbing up to the beams above a subway platform, he knew he needed to do something quick, and followed her, ultimately saving her life.

Michal Klein from New Jersey had just come out of Broadway-Lafayette station in Manhattan when she saw two people sitting on a beam, about 20 feet (approx. 6 meters) above the subway platform.

“I couldn’t really tell if they were laughing or if one person was crying. I thought it was friends. I wasn’t sure. My first thought was: How did they get up there? I thought they were just goofing off,” she told CBS New York.

She decided to ask another woman nearby what had happened. “She told me the girl had climbed over the railing, and went across the beam, and she said suicidal things,” Klein said.

Then a man came and followed the young woman to the beam to calm her down and comfort her by putting an arm around her. “It was just like a random person who went over to keep her calm,” Klein told New York Daily News.

Seeing the man risking his life to help a stranger, Klein said to CBS New York: “I don’t know what I would’ve done. I don’t think I would’ve climbed over to do that. He actually cared enough, whoever he was, to help her. A lot of people seemed to be like, ‘Oh, it’s New York,’ and kept walking.”

Police soon arrived and escorted her from the station to an ambulance.

“I just hope that she gets help,” Klein said to New York Daily News.