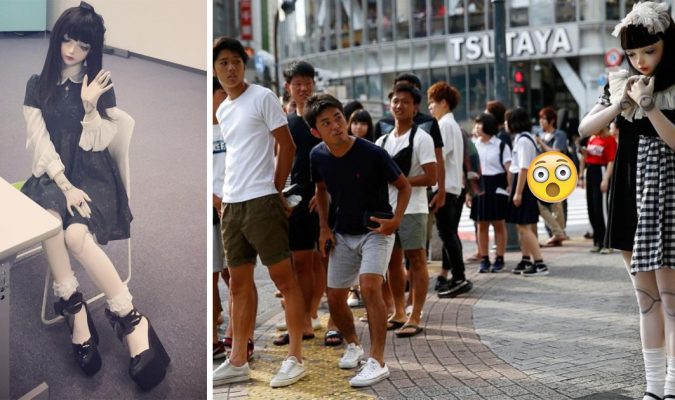 Lulu Hashimoto is the latest trend in Tokyo’s fashion modelling scene. However she got everyone surprised.

A full-body suit wearing a wig, a mask and stockings patterned with doll-like joints set a new trend when she was seen loitering around Tokyo, Japan.

She may be a dancer, a singer or someone whom you know that just wants to live a fictional character other than living her normal world.

“I have always really liked dolls and for me, the epitome of cuteness is dolls,” said Hitomi Komaki.

Dressing up as a mascot is now a popular trend in Japan which is referred to as ‘kigurumi’.

Komaki took the initiative to create a body suit that looks exactly like a doll and is able to move around like a normal people.

Lulu body suit is made only one and will only fit dancers, designers and models, however the identity of whoever wearing the body suit will remain as a secret.

“It’s like wearing nice clothes or putting on false eyelashes to become cuter,” she added.

Komaki’s fellow fashion designer, Koh Ueno created stockings worn by Lulu. He used airbrush to draw the doll-like joints with hope that one day, many women will wear these stockings.

“I want to see women wear these stockings and transform,” said Ueno.

“I want them to experience the extraordinary- to become otherworldly, artificial or like a doll,” he added.

Lulu does not just set a new trend, but is also famous in social media when thousands of people followed her on the Instagram and Twitter. The social media accounts were made by Komaki herself to show to other people regarding her creation.

Enjoy watching the videos below. Do you think she looks a little bit spooky because of the recent box office Anabelle movie?