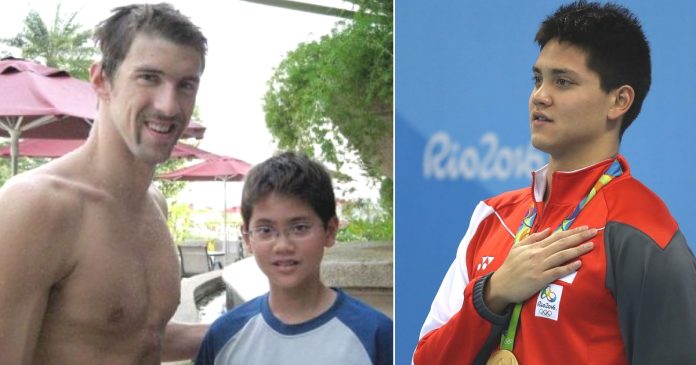 16 years ago, a six years old boy had a chat together with his relatives regarding his grand-uncle, Lloyd Valberg who was Singapore’s first ever Olympian representing the country in the high jump event in 1948 Games. It was a normal conversation among them, however it inspired the young boy to become a professional athlete one day.

Seven years later, he had his dream come true when he met his idol; Michael Phelps and took a picture with him. At that time, his dad hosted the US Olympic team at a country club in Singapore, thus giving him the chance to meet the US Olympic team which further ignited the spirit inside him.

At the age of 13, he left his home for the Bolles School in Florida, US and started training under Spanish coach, Sergio Lopez. His determination and spirit made him manage to reach his goals. He is none other than Joseph Schooling, a Singaporean swimmer and a gold medalist in the 100m butterfly event at the 2016 Olympics. He became the first Singaporean man to reach an Olympic swimming final and was indeed a story worth to be told about.

Four months after that, he became the first Singaporean swimmer to meet the Olympics “A” qualifying time for the 2012 London Olympics. He also won the 50m fly in a new Games record time, a silver in 200m individual medley and bronze in the 100m fly.

Born in June 16, 1995 to May and Colin Schooling, he was the youngest member of Singapore’s contingent as he made his Olympic debut in London in 2012. But as the saying goes, ‘Good things may not come easy”, Schooling had to deal with challenges just before his 200m fly heats due to his swim cap and goggles that were apparently failed to meet the Olympic regulations. Hence, were rejected from the Olympics. He finished 26th overall (1:59.18) and did not qualify for the semi-finals. He also did not advance from the 100m heats, finishing in the 35th (53.61s) and 26th (1:59.18). Despite the challenges he encountered, Schooling did not give up and promised to strive again.

In March 2013, Schooling beat Ryan Lochte who is an 11-time Olympic medallist at the Speedo South Sectional Championships in Florida. Schooling times 54.71s to win the 100m fly final while Ryan came in second (55.20). Seven months after that, he later became the first athlete to be granted long-term deferment from National Service that let him to chase his dream of winning an Olympic medal at the 2016 Olympic Games.

Later that year during the Myanmar SEA Games, he succeed in winning himself six gold medals out of six events, setting four new Games records in the process.

In March 2015, he won his first individual title at the prestigious NCAA Division 1 men’s swimming championships after clocking 44.51s in the men’s 100-yard (91.44m) fly. He set a new record than five-time Olympic medallist Ian Crocker’s (44.72) school mark set 11 years ago. He is named the NCAA top freshman swimmer.

Five months later, he created his own history by becoming the first Singaporean to win a medal at the World Championships when he finished third in the 100m fly in a new national record and Asian record time (50.96s).

Schooling once said that it would be his ultimate goal in life if he managed to win Olympic gold and race against his own idol, Michael Phelps in that final. And in the year of 2016, two months before the Olympics, he beat Phelps at the Austin Elite Invite. Schooling set a record in 51.58s in the 100m fly to take gold ahead of Phelps who finished second in 51.65s.

At the Rio Games, Schooling set a new Asian and national record of 50.83s during the 100m fly semi-finals to qualify himself for the final. His record is also the world’s fastest time during the year.

Continue to strive, Schooling is indeed a perfect role model for anyone to look up to as someone who does not give up and always does the best that he can. Being a national swimmer is not easy as he represents the country and many people are rooting for him, thus creating a lot of expectations from everyone who supports him. However, he continues to do the best he can and does not let anyone, especially his parents down.